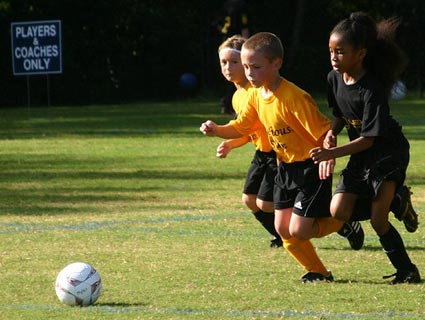 Hip, hip, hooray! As of last week, student athletes in New York will no longer have to worry about getting a mouthful of toxic chemicals when they dive for the ball: The state became the second to ban pesticides on school playing fields and playgrounds, following Connecticut, which has had a similar law since 2007. A ban has also been proposed in New Jersey.

The move would seem like a no-brainer, considering the ever-growing pile of evidence that pesticides are harmful to kids. Childhood exposure to the chemicals has been linked to a long list of conditions, including asthma, ADHD, and even cancer. But not everyone thinks school spray bans are a good idea. Some have argued that pesticides are essential tools for preventing tick-borne illnesses like Lyme disease, allergies to bee stings, and other creepy-crawly threats. Here’s a spokeswoman for the pesticide industry group Responsible Industry for a Sound Environment (RISE) in the Hartford Advocate on Connecticut’s school pesticide ban:

“It’s quite an over-reach,” says RISE spokeswoman Karen Reardon. She says the failure to use pesticides on school fields in Connecticut, for example, could lead to “the spread of Lyme disease” by allowing deer ticks to multiply. There can be instances when “pest pressure needs to be knocked down immediately,” Reardon says, adding the best way to do that is with the “judicious use” of pesticides.

Environmental health advocates dismiss the tick argument as a pesticide-industry scare tactic. “Whether it’s public health crises or those deadly weeds, there’s always some emergency that industry touts as the reason to spray pesticides on school grounds,” says Paul Towers, state director of the California watchdog group Pesticide Watch. Still, the idea of playing fast and loose with Lyme disease at schools is a bit unsettling. So is there any merit to RISE’s claims?

Not really, says Mana Mann, a pediatrician with the Mt. Sinai’s Children’s Environmental Health Center. “There is no evidence supporting the use of pesticides in the school environment to affect the incidence of Lyme disease.” Furthermore, most laws that ban or limit chemical use at schools make exceptions for public health issues. Both New York’s and Connecticut’s bans fall into this category. “We’re not asking anyone to stop controlling ticks,” says Paul Tukey, the founder of the environmental health advocacy group Safe Lawns. “We’re trying to get people to stop using pesticides to kill dandelions.”

Not as easy as it sounds, considering that the $36 billion pesticide industry has devoted significant resources to convincing the public that its wares are keeping them safe. The RISE website Debug the Myths is entirely devoted to defending the reputation of much-maligned pesticides. “We know you can handle the truth,” reads one section of the site. “Pesticides help keep our families healthy and our homes happy.” This summer, Debug the Myths will go on tour, offering kid-oriented activities like a “What Pest Are You?” quiz. Adults can “write a letter to tell your local government officials about the benefits of the pesticide and fertilizer products you use at home and about those used in your community.”

All the PR and lobbying efforts seem to be paying off. In California the Healthy Schools Act of 2011 would have required school districts to adopt stricter rules around pesticide applications. It was weakened in an amendment this month, after lobby groups including RISE and the Western Plant Health Association fought against it. The first version of the bill forbid, for example, the use of known carcinogens and blanket spraying on school grounds; the amended version included neither of these rules. When I spoke to Dominic DiMare, a lobbyist for the Pest Control Operators of California, he said he believed that industry groups played a major role in the amendment.

Earlier this year in Connecticut, environmental groups fought for a bill that would give individual cities and towns more autonomy in limiting pesticide use in lawns and public spaces. But in March, State Rep. Richard Roy (D-Milford) announced that the state senate’s Environment Committee had decided not to introduce any new pesticide bills in 2011. Roy told a CT News Junkie that he “made the agreement with the lead pesticide lobbyist to take a year off on pesticides because passage of the law banning pesticides on school grounds was so contentious.”

Politically expedient though such deals may be, they’re not the best move for kids’ health. “Children are especially vulnerable to pesticides because they are still growing and developing,” says Mann, the Mt. Sinai pediatrician. “Because research studies have shown a wide range of negative health effects for children from their exposure to pesticides, pesticide use [at schools] should be avoided as much as possible.”

Laws about pesticide use at schools vary widely. Many states use some form of integrated pest management, which incorporates non-chemical control methods as well as traditional pesticides, though there’s not a lot of consistency in exactly how this is interpreted. If you’re curious about policies in your state, check out Beyond Pesticides’ guide (PDF).