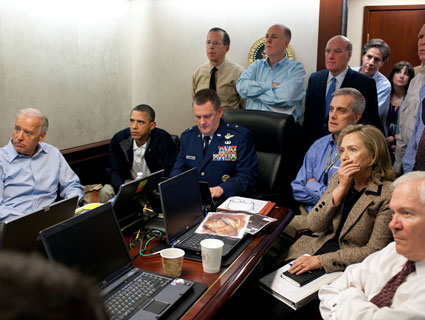 On Monday afternoon, I emailed a former CIA officer who has worked on covert operations and asked for his take on the Osama bin Laden operation. He replied:

The [Al Qaeda] system is reeling overseas. Pakistan is terribly embarrassed, and every AQ guy hiding out right now, has to worry not only about predator strikes, but 40 Seals and the agency landing on your roof.

He added, “I was at ground zero last night”—meaning CIA headquarters, not the compound. “It was a wonderful evening.” He called the mission “a skillful and daring operation that carried considerable risk, but great gain.”

He was thinking of the special forces that carried out the strike. He could also have been referring to President Barack Obama. At a press briefing on Monday, White House counterterrorism aide John Brennan called Obama’s decision to authorize the operation “one of the most gustiest calls of any President in recent memory.” Brennan works for the guy, but he was right: Obama had gambled his presidency on this mission.

Today, it’s all hurrahs—including from Republicans and conservative foreign policy advocates, even those who routinely denounce Obama as a weak-kneed bumbler and naïf who practically yearns to undermine the national security of the nation. For instance, in February, Newt Gingrich slammed the Obama administration as “a very weak government led by a group of amateurs in foreign policy.” (Months earlier, he had blasted Obama for possessing a “Kenyan, anti-colonial” worldview.) But Monday morning, Gingrich commended Obama for having “intensified” the US campaign “against our enemies.”

Yet imagine what Gingrich and the rest of the Obama Hate Machine would be saying had the mission failed. In short, the message would have been: Jimmy Carter, Jimmy Carter, Jimmy Carter. The right-wingers would have pummeled Obama, viciously comparing him to the last Democratic president in office during a botched rescue attempt—the Desert One operation that sought in 1980 to win the freedom of American hostages held in Tehran. That debacle in the desert, a secret mission that instantly became a PR nightmare, helped define Carter—fairly or not—as a loser and probably contributed to his loss later that year to Ronald Reagan.

Without doubt, the planners of the OBL operation were aware of the ghost of Desert One. Certainly White House officials, including the president, were braced for an onslaught, should the mission go bad. And there were hundreds of ways the operation could have gone south. A single bad assumption or stray bullet could have ended the operation and caused an ignominious failure in Abbottabad. In such a scenario, whatever the cause, Obama would have received the blame, no matter if the origin of the screw-up had had nothing to do with him.

Obama was betting his presidency on the actions of people he didn’t know: US Navy SEALs working under tough conditions on a high-stakes mission thousands of miles away. Moreover, Obama and his aides must have known that the stigma of failure could be far more defining than the aura of success. Though this major victory for Obama can be expected to boost his prospects all the way to Election Day, such a triumph could easily be wiped away by an unrelated setback or failure (say, another economic collapse or terrorist attack). Yet had the mission flopped, the stench of defeat would have been tough to overcome between now and November 2012. The potential political liability was greater than the potential political benefit.

A cautious president overly guided by political concerns would have been reluctant to ride into such a cost-benefit equation. Yet Obama signed the order for the mission on Friday—and then proceeded with his schedule, which included trips to Alabama (to meet with Americans who survived tornadoes) Cape Canaveral (for a shuttle launch that was scrubbed) and Miami (for an commencement address), as well as the White House Correspondents’ Association shindig, and a Sunday morning game of golf. In retrospect, his joke about Donald Trump’s big decisions—whom to fire—is even sharper than it appeared Saturday night. (I spoke with Obama at a small reception minutes before the dinner began; there was no tell.)

It must have been a nerve-wracking series of days—even for such a cool customer. “It was probably one of the most anxiety-filled periods of time, I think, in the lives of the people who were assembled here yesterday,” Brennan said. But the episode demonstrates that this president, who is often accused (on the left) of wimping out of political fights and (on the right) of too often wringing his hands, is willing to act decisively and take political chances. Not in every instance. But for certain stakes at certain times. (Brennan noted that there had been a vigorous debate within the administration over whether to proceed with the operation—why not bomb instead?—prior to Obama giving the green light to the higher-risk option.)

The anti-Obama loudmouths who claim that he’s not leadership material or that he isn’t sufficiently concerned about threats to the United States (or that he’s a secret, Kenyan-born Muslim socialist who wants to destroy the United States in order to gain dictatorial powers) are going to have a tough time selling that swill after this. But they will probably find a pivot point in the future and return to throwing red herrings at the commander in chief. Meanwhile, the president, who once earned the nickname “No-Drama Obama,” showed he was willing to put his own future on the line for a high-risk action that he deemed necessary for the good of the nation. And that line was quite a thin one.