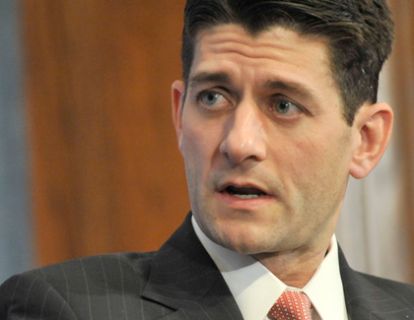 Republican golden boy Paul Ryan is hardly known for his sympathies to organized labor. With his drastic budget proposal to privatize Medicare and unabashed support for Governor Scott Walker’s anti-union bill, the Wisconsin congressman has become the new face of the GOP’s right flank.

But a closer look at Ryan’s voting record reveals a single eyebrow-raising exception when it comes to labor unions: Ryan has consistently broken with his party to defend a law protecting the wages of unionized construction workers. His stance on the issue has earned him the support of a handful of unions back home, setting them apart from the majority of Wisconsin’s labor community, which who has cast Ryan as public enemy No. 1. What explains this break in GOP orthodoxy? Ryan’s family owns a construction firm that relies heavily on union labor—and the company could suffer if the law were repealed.

Since he was first elected to Congress in 1998, Ryan has been a staunch supporter of the Davis-Bacon Act, which prevents federally funded construction projects from undercutting the prevailing union wages in any local area. Republicans have been pushing to repeal Davis-Bacon for years, claiming that it benefits unions at the expense of taxpayers. In a handful of states, GOP lawmakers have already succeeded in overturning state versions of the law. But as recently as February, Ryan joined 47 other Republicans and 185 Democrats to oppose overturning Davis-Bacon, defeating the repeal bill.

Ryan’s support for Davis-Bacon is an outlier in the lawmaker’s predominantly anti-union record. As Walker tried to push through a bill that eliminates most union rights for public employees, drawing thousands of protestors to the Capitol in Madison, Ryan famously compared the protesters to the anti-government uprising in Cairo and likened the anti-Walker demonstrations to “riots.” He opposes the Employee Free Choice Act, which would make it easier for unions to organize, and received only a 20 percent rating from the AFL-CIO in 2008. But for a few local unions in Wisconsin’s 1st Congressional District, Ryan’s support for Davis-Bacon has been enough to win their support—along with tens of thousands of dollars in campaign contributions.

“We don’t agree with him on all issues…but we have a working relationship on the primary issue of importance to us,” says Mark Reihl, executive director of the Wisconsin State Council of Carpenters. “He’s supported us on every Davis-Bacon vote that’s been held out there.” The Carpenters and Joiners Union, as a result, has consistently been one of Ryan’s top 20 contributors over the years; Ryan has received a total of $47,500 from members of the union since taking office.

Similarly, the Operating Engineers—an AFL-CIO affiliate closely tied to the home and road construction industries—has also been a regular Ryan donor, with $38,500 in total contributions. The Laborers Union also contributed to Ryan’s campaign early on, though support has dropped off since then. “That is one thing that we can thank Paul Ryan for is the support of the prevailing wage and putting work back into the roads and highways here,” says Anthony Neira, business manager of the Laborers’ Local 113.

But that’s about as far as Ryan’s union backing goes. “We support truly nothing the guy says or does,” says Rich Abelson, executive director of an American Federation of State, County, and Municipal Employees chapter that represents employees in Ryan’s district. “His whole stance on health care, Medicare, Medicaid, government funding of social services—every ultra-conservative position has been articulated by Paul Ryan.”

Both Ryan’s supporters and detractors point to his family ties to the construction industry to make sense of his position. His great-grandfather established Ryan Incorporated Central in 1884, and the company is currently run by his cousins. Ryan Inc. Central—which has been a signatory to the International Union of Operating Engineers since 1966—once employed Ryan as a consultant. Like other companies using unionized labor to carry out public projects, his family firm would suffer a big blow if Davis-Bacon were repealed, as federal contractors could drastically underbid the firm.

It was the Ryan family’s pro-union history that originally emboldened labor unions like the Carpenters to approach Ryan about protecting the wages of unionized construction workers. “After he was elected, we opened a dialogue with him,” says Reihl. “His family’s in the construction business, and he understands construction issues and the building trade.” Ryan was also one of the few congressional Republicans to support the bailout of the auto industry, given the auto plants in his district—which also rely on unionized labor. “I grew up in organized labor,” Ryan told Milwaukee Monthly in 2005. “I have a lot of constituents who are in organized labor. I really do not have this ‘us against them’ mentality. (Ryan’s office did not respond to a request for comment.)

But while Ryan’s labor supporters appreciate his Davis-Bacon backing, they criticize his positions on nearly every other major issue. Reihl says that his union is concerned about Ryan’s proposed overhaul of Medicare, among other issues: “It’s going to effect our members. I don’t believe that what the government is going to provide will cover the costs.”

Describing his members as “split” when it comes to supporting Ryan, Local 113’s Neira criticized Ryan’s support for tax breaks for big oil and gas companies. “It’s hurting the working people in America,” he says. Finally, the unions have been united in criticizing Ryan’s support for Walker’s union-busting measures.

For the most part, however, the pro-Ryan unions have been reluctant to push back on the other issues, adopting a more pragmatic strategy. “We can talk about all the things that we disagree on, or we can focus on the things we agree on,” says Reihl.

In Wisconsin, however, Ryan’s support for Davis-Bacon could end up pitting him against his own party once again. Over the past two decades, nine states have repealed their state-level version of the law, and new momentum for repeal has taken hold with Wisconsin’s new GOP majorities in the state Senate and House. Though no concrete proposals have surfaced in Wisconsin yet, labor organizers say they anticipate a push for such a rollback. “There’s going to be a serious challenge,” says AFSCME’s Abelson. “I don’t think there is an item concerning organized labor that is not in danger.” Such a proposal could force Ryan to intervene to defend the Davis-Bacon Act—or risk a fierce backlash back at home.

What’s more, Ryan’s own far-reaching budget proposal could also undermine support for his own pet issue. His 2012 budget plan includes progressively steeper cuts to discretionary spending, which could eliminate funding for enforcing the Davis-Bacon Act, says Ross Eisenbrey, vice president of the Washington-based Economic Policy Institute, a left-leaning think tank. Ryan’s far-right proposals have already built momentum to unseat him in the next election cycle. Though he acknowledges that the labor movement is a “big tent,” Abelson says there’s no doubt that most unions in Wisconsin will end up lining up against Ryan. “There’s going to be a serious challenge,” he says.