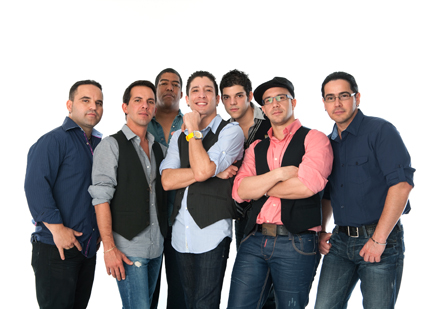 It all started with a coat hanger: “If they catch you, you have to pay,” says Jorge Gomez. “We made our own antenna. We listened to everything.” This isn’t a description of a secret espionage effort. It’s the story of how a Cuban teenager and his friends—now members of Gomez’s timba band, Tiempo Libre—fell in love with American music. They rigged up a makeshift radio using a friend’s military-issue guidebook and frequency map, the hanger, and some cable. This allowed them to listen to music banned during Cuba’s “Special Period.”

But catching Miami radio waves from their moonlit Havana rooftop wasn’t the kids’ only form of subversion. Many a night was dedicated to recording the songs of Michael Jackson; Earth, Wind, & Fire; Chaka Khan; and Gloria Estefan. “We recorded by night, and then in the morning we made parties. We had a six-hour recording,” Gomez reminisces. “When there is a good thing, we don’t sleep for days.”

The island’s weather didn’t stop them either: “Some weeks, you would have the wind blow and be recording in the middle of a very huge shower in rain with an umbrella,” he adds.

The three-time Grammy-nominated band eventually made it to Miami, where the musicians immediately feel at home among all the Cuban expats. “You can go anywhere and there is a Cuban. So you are living in Cuba with everything, but with no ‘Special Period,'” says Gomez. He admits there are some things he misses from home, like gossiping and playing dominoes in the old neighborhood, “the smell of the city,” and the ability to just kick back. “Here it is only work, work, work,” he laments.

But if anyone can help Americans relax, it’s Gomez’s seven-man band. Their music is contagiously celebratory. The snappy motion of Afro-Cuban conga beats creates the illusion of a fast-forwarded video clip. It’s no wonder timba music is associated with twisting, thrusting hips and shoulders. High notes pop off the keyboard, while funk is pulled through the bass. A sort of call-and-response plays out between the jazzy trumpet, saxophone, flute, and swinging Spanish lyrics mourning love lost and liberties gained.

Tiempo Libre’s new album, My Secret Radio, is themed on the band’s journey from Havana rooftops to American stardom. They’ve played all over the world, collaborating with big names (including classical violin master Joshua Bell, whom Mother Jones interviewed recently). They’re currently touring the West Coast, hitting various spots in Montana and Oregon in the next two weeks. Gomez told me they’re having a blast seeing the country, and often joke about American restaurants’ assumption of their culinary preferences. “They think you are Mexican and they put a lot of hot pepper in your food. It happens all the time. But Cubans don’t eat spice,” he says, laughing.

Their music certainly doesn’t match their tame palates. Timba is full of flavor, stretching across the globe, fusing son, latin jazz, Afro-Cuban beats, and in Tiempo Libre’s case, cha cha cha. “We love to play jazz,” Gomez says. “But we love to combine jazz with everything.” And they have. Perhaps one of the more unusual formulas combines classical and timba, a mix heard on their album, Bach in Havana.

Despite the global repertoire, Gomez says being an immigrant musician means everyone views him as a sort of cultural ambassador. “Whatever I say becomes a serious situation. If you work in a cafeteria, you don’t have that kind of audience. We have a finger pointed at us. We have more responsibility.”

But he doesn’t mind it, and even enjoys the responsibility of sharing Cuban culture with the world.

“Cubans are so full of love to share, so full of culture and a lot of incredible energy to change things. But they are afraid to do that,” he said. “We want to teach the world how we are. We want them to be like us and learn how to dance, how to speak Spanish. I want the world to know me the way that I am.”

Here’s Tiempo Libre playing on Dancing With the Stars.