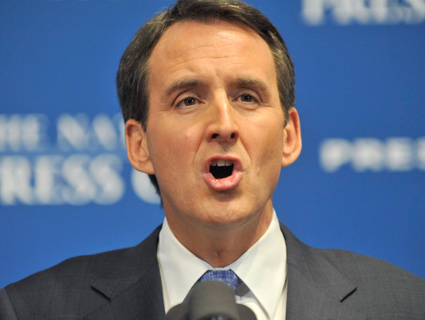 Tim Pawlenty has a new campaign motto. In a slick video officially announcing his bid for the 2012 GOP presidential nomination, Pawlenty notes that he could unveil his candidacy with a big speech replete with balloons (“red ones, white ones, and blue ones”), pass out cupcakes, and promise to eliminate a $14 trillion debt, create jobs for 10 million Americans, and restructure Social Security and health care “all without making any tough decisions.” Or, he says, “I could try something different. I could just tell you the truth.” What truth? That “our country is in big trouble,” with too much debt and too few jobs. And to emphasize that Pawlenty is the truth-telling candidate, his campaign attached this slogan to the video: “A time for truth.”

This is clearly a consultant’s concoction: Let’s position you, Governor, as a guy who tells it as it is. In the two-minute video, Pawlenty repeatedly bangs this drum, saying that he will launch “a campaign that tells the American people the truth.” But do voters want truth or do they want action—more jobs, say? In the personal integrity department, President Barack Obama tends to rate well in public opinion surveys. In a recent NBC news poll, 51 percent rated Obama “very good” when asked if he is honest and straightforward. Only 29 percent granted him a “very poor” rating on this front. Obama has scored higher in the past; 64 percent dubbed him honest in an April 2009 survey. But his personal reputation has not been much of a political problem. CNN polling director Keating Holland noted in January that a survey conducted for the cable network “tested Obama on a variety of personal characteristics, and he gets high marks for honesty, sincerity, leadership skills, and compassion.” Americans, the poll found, could disagree with Obama’s policies and still think of him as honest and stalwart.

By trying to depict the former Minnesota governor as a truthier guy than the man in the White House, Pawlenty—and his aides—might be attempting to exploit a problem that doesn’t exist. (Though they may also be aiming at Republican frontrunner Mitt Romney, who has a history of flip-flopping on issues important to social conservatives, including gay rights and abortion rights.) Emphasizing straight talk as the critical matter also comes with a potential cost. It inevitably invites greater scrutiny of the candidate who’s boasting of his honesty, and Pawlenty is hardly more truth-loving than the average presidential candidate.

Factcheck.org, a nonpartisan outfit that vets the statements of politicians, reports that in recent months “we have found [Pawlenty] straying from the facts.” The group provided several examples:

PolitiFact.com also slapped Pawlenty with a “barely true” verdict for declaring in his book, Courage To Stand: An American Story, that in 2009 he cut government spending in Minnesota “in real terms for the first time in 150 years.” It turns out the state only keeps fiscal data dating back to 1960, so it’s not possible to compare Pawlenty’s action to the previous 150 years. Also, spending had dropped in years prior to 2009, including 1986 and 1983. And here’s the kicker: State spending in 2009 dropped partly because Pawlenty used money from Obama’s stimulus to put off some of the state’s own spending that year.

In an announcement speech in Iowa on Monday, Pawlenty repeated this first-time-in-150-years claim. (The staffers on his time-for-truth campaign obviously didn’t check with PolitiFact.com.) That speech also included another familiar GOP whopper; Pawlenty maintained that Obama “promised that spending $800 billion dollars” on the stimulus bill “would keep unemployment under 8 percent.” PolitiFact.com has charitably called this accusation “barely true.” (As PolitiFact points out, the Obama administration’s early use of the 8-percent figure “was a projection, not a promise. And it was a projection that came with heavy disclaimers.”) The prepared text for Pawlenty’s speech mentioned the word “truth” 16 times; the word “economy” just six times.

Pawlenty’s “A Time for Truth” video looks and sounds great. His speech was full of sharp lines: “Politicians are often afraid that if they’re honest, they might lose an election.” But do Pawlenty and his campaign handlers believe he can run from his own record of non-straight talk on such grand matters as bank bailouts and cap and trade? It’s far too early to handicap the GOP race, but Pawlenty’s use of such hollow spin suggests his campaign team is not strong on strategic creativity—even though it is indeed creative to claim Pawlenty is more honest than the competition.