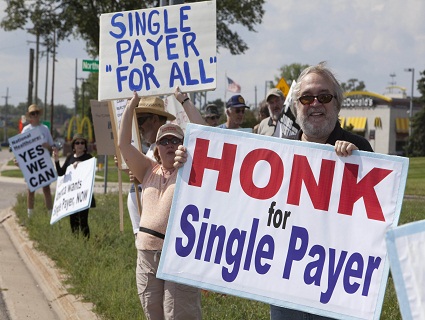 As Gov. Peter Shumlin took his spot on the granite steps of the Vermont State House, a row of people fanned out behind him wearing bright red t-shirts proclaiming, “Health care is a human right.” The slogan sounded noble, and wildly unrealistic. Until the governor spoke.

“We gather here today to launch the first single-payer health care system in America,” began Shumlin, a Democrat who has been governor barely four months. “To do in Vermont what has taken too long: have a health care system, the best in the world, that treats health care as a right, and not a privilege.”

Moments later, the governor made history, signing a law that sets Vermont on a course to provide health care for all of its 620,000 citizens through a European-style single payer system called Green Mountain Care. Key components include containing costs by setting reimbursement rates for health care providers and streamlining administration into a single, state-managed system. The federal health care reform law would not allow Vermont to enact single payer until 2017; Vermont is asking the administration to grant it a waiver so that it can get there even faster, by 2014.

The push for single payer system in Vermont was built slowly and methodically over the last decade, but has moved with remarkable speed since Shumlin took office in January. A few weeks after the new governor’s inauguration, the Democratic-controlled legislature convened a rare joint session to hear from Dr. William Hsiao, a Harvard economist who has been involved in designing health care systems in seven countries. Last year, the legislature commissioned Hsiao to analyze the costs and benefits of various health care options, ranging from single payer to a fully privately managed system. The soft-spoken economist told a packed state House that a single payer plan would be about 25 percent cheaper for consumers, businesses, and the government than the current system of private health insurance, saving about $500 million in just the first year.

The data emboldened Shumlin, the legislature, and the single-payer advocates who had organized throughout the past decade, even as Shumlin’s Republican predecessor dismissed their ideas. Last fall, Shumlin had campaigned on twin themes of job creation and health care reform, and he often cited his experience as the owner of a successful travel business. (“I know firsthand that the biggest obstacle to job growth is the 10, 20, 30 percent increases in insurance premiums.”) He slammed the current “unsustainable system that will…bankrupt us.”

Single payer advocates have been a constant and visible presence around the state. The independent Vermont Workers’ Center launched its “health care is a human right” campaign in 2008—inspired, said health care organizer James Haslam, by the desperate calls the Center was receiving on its workers’ hotline. “It was becoming more of a health care hotline,” he said. The group’s members went door to door, conducted numerous forums for legislators and organized health care rallies that drew thousands.

Health care providers also spoke up. Dr. Deb Richter, a family physician, moved to Vermont in 1999 from upstate New York, where she despaired at seeing her patients getting sicker and even dying as a result of problems with health insurance. As chair of Vermont Health Care for All, she gave 500 talks around the state, and helped bring along many reluctant health care providers. Richter was beaming when I saw her in the State House lobby last week. “I feel ecstatic,” she told me. “It’s like giving birth.”

Shumlin, a wiry, hyper-energetic lawmaker who often insists on shaking every hand in the crowd, staked his gubernatorial candidacy on single payer. It was a bold and risky move. The former president of the Vermont Senate, he was narrowly elected governor last fall after winning a five-way Democratic primary by some 200 votes, and defeating a popular Republican Lieutenant Governor by just 2 percent. Shumlin pointedly ignored the national Democratic strategy of tacking to the center, and instead championed progressive issues, from abortion rights to closing the state’s lone nuclear plant, to health care reform. I asked him why he’d hitched his star to single payer.

“It’s first of all a huge jobs creator, secondly we can’t sustain the current system—we are spending money faster than we are able to earn it,” he told me before heading outside to sign the bill. “So we think it’s an economic development issue as well as a human right.” But when I asked whether Vermont might a national model, the governor sounded a humble note. Major questions—such as how the program will be funded—have yet to be worked out. “You know, we are launching an ambitious effort here,” he said. “We want it in place by 2014. But I don’t think we should ask anyone to follow us until we figure it out. And that’s what we’re trying to do.”

Opponents have focused on the unknowns in the reform effort. Not a single Republican in the House, and only one Republican in the Senate, supported the bill. Republican Rep. Patti Komline, assistant state House minority leader, told me, “When people ask questions like how much is it going to cost and who’s gonna pay for it—they say, ‘Well this bill is more fact finding and information gathering.’ Which doesn’t make it very historic.”

Physicians for a National Health Program has also been ambivalent about the bill, saying Vermont’s law “is much more modest in its actual reach than a single-payer plan would be.” Richter, a past president of the organization, responded, “You have to think positive and continue to take action to try to get to next level and the next step. Some of the criticisms are over details that haven’t yet been worked out.”

Organized opposition to Vermont’s health reform was relatively muted in the last few months, and was mainly led by insurance agents. But advocates are bracing for an influx of national money and media. “There are definitely people who want to see this fail. We cannot let that happen,” said House Speaker Shap Smith. “We need to work together to show the way for the entire country.”

Shumlin’s early success on health care has caught the attention of Washington. In April, Congressional Democrats asked Shumlin to appear opposite Wisconsin Gov. Scott Walker before a Congressional committee. In a rebuke to Walker, Shumlin talked about his approach to Vermont’s fiscal challenges. “I don’t start with collective bargaining, and I don’t start with my public pensions. I start with the true costs. In Vermont—and this is true of most of the states of the country—health care is my biggest rising cost.”

On this muggy late-May day, Shumlin reveled in the success of his signature effort. He walked over to shake hands with a group of University of Vermont medical students, conspicuous in their white lab coats. Therese Ray, a first year medical student from Denver, told me that as a result of single payer, “I will absolutely stay in Vermont.” Another med student, Larry Bodden from New Orleans, said he grew up in an uninsured household. “My family had a deep seated fear of having to go to the doctor because we didn’t have insurance. I look forward to Vermonters not having that fear.”

Gov. Shumlin suddenly called for the several hundred people who had gathered to come closer as he signed the bill. “Everybody in,” he shouted.

“Nobody out!” came the reflexive reply, a call and response version of a slogan of the grassroots single-payer campaign. Shumlin chuckled, then made the single-payer bill the law of the Green Mountain State.