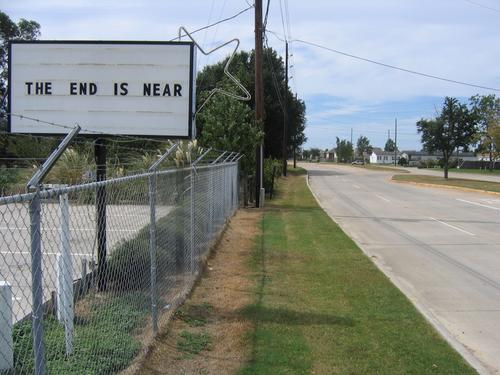 In case you’ve been out of the loop because your town isn’t plastered with signs foretelling the End of the World, some portion of the population believes that the Rapture is coming this Saturday, May 21, at 6 p.m.

I’ve assumed that this is a small but particularly vocal group—and fairly well funded, given the number of billboards and buses they’ve plastered in major metropolitan areas like DC and San Francisco. Many people (myself included) have been having a good time mocking these predictions of the pending apocalypse.

But as some of my favorite godless heathens over at the Center for Inquiry pointed out today, most Americans differ with the May 21sters only on the question of when the rapture is going to occur, not if. A total of 41 percent of Americans think Jesus Christ is returning by 2050—that’s 23 percent who say he is “definitely” on his way back and 18 percent that say he’s “probably” coming soon.

In the South, a full 52 percent of those polled predicted that JC’s return is imminent. Those figures come from a June 2010 poll from the Pew Research Center for People & the Press.

“It’s a sobering thought that well over 100 million Americans believe Jesus is on his way—the date just may not have been penciled in yet,” said CFI President and CEO Ronald A. Lindsay in a press release Thursday. “It’s both disturbing and unfortunate that so many still cling to what can only be described as a fairy tale.”