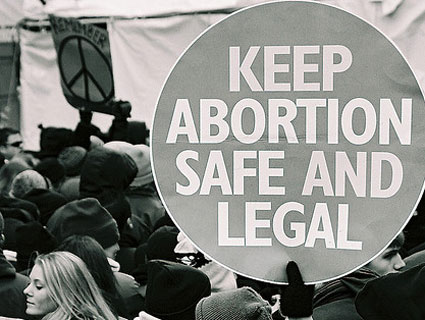 Kansas has long been a frontline in the abortion wars, so it isn’t much of a surprise that anti-abortion crusaders there have pioneered one of the newest tactics for limiting access to legal abortion procedures: developing onerous regulations that specifically target clinics. And this strategy—which could lead to shutting down all of the state’s abortion clinics by the end of this month—is being embraced by abortion foes in other states as a way to end abortion in practice if not in law.

This is how it works: anti-abortion legislators pass what are often called “TRAP” laws, or “targeted regulation of abortion providers.” That is, regulations that only apply to abortion clinics, setting compulsory standards that are often difficult to meet, like mandated sizes for waiting and recovery rooms, reconfiguring of exits and entrances to facilities, and additional bathrooms. In Kansas, abortion providers last week were handed a long list of new regulations and told they must comply by July 1. Virginia and Utah have signed similar measures into law this year, joining states like South Carolina and Indiana that have previously targeted providers with stricter regulations, and a number of other states have been considering bills like these.

Americans United for Life, one of the largest national anti-abortion groups, has been urging its supporters to pass similar measures in their own states. When the Arkansas state Senate advanced such legislation this year, AUL praised the measure for its “unique pro-life protections.”

Elizabeth Nash, a public policy associate at the Guttmacher Institute, notes that though TRAP laws aren’t new, they are now being used to place increasingly more strict and disruptive regulations upon abortion clinics. “There is quite a bit of momentum behind restricting access to abortion,” says Nash. Sharon Levin, vice president and general counsel at the National Abortion Federation, a group that represents abortion providers around the country, notes that they have seen a lot more of this type of legislation advanced this year. “These are really politically motivated laws,” says Levin. “These laws have nothing to do with patient safety.”

In Kansas, the state legislature passed its TRAP law in April, which created a new licensing category for abortion providers. But the state didn’t issue the final regulations until June 17, and then gave the clinics just two weeks to comply with the new rules or potentially be denied a license to operate. A staffer at one of the three remaining abortion clinics in the state told Mother Jones that the new rules would require it to dramatically expand the size of its waiting and recovery rooms, as well as the janitor’s closet, and would be impossible for the clinic to comply in its current office. (As we’ve reported before, it can be very difficult for abortion providers to find new offices—especially in Kansas.)

The Kansas TRAP law also requires all doctors working at the clinics to have admitting privileges (or standing approval from a hospital to directly admit patients) at a hospital within 30 miles of the clinic. Obtaining that permission is a process that typically takes 90 to 120 days—a barrier impossible to surmount before the state’s July 1 deadline. Abortion providers question the need for this regulation, since less than 0.3 percent of abortion patients have a complication that requires hospitalization, and clinics can still refer women to a hospital for care without the doctor at the clinic possessing admitting privileges.

Peter Brownlie, president and CEO of Planned Parenthood of Kansas and Mid-Missouri, said he believes that its clinic in Overland Park, Kansas, should be able to pass inspection—but not without much scrambling to meet what he calls “ludicrous” new regulations. Inspectors arrived at the clinic’s door less than 48 hours after it had received the newest version of the rules. The clinic, which conducts 5,000 abortions a year, is already licensed as an ambulatory surgical facility and subject to many of the same requirements, and it has a doctor on staff with hospital admitting privileges. But now the clinic is required to maintain supplies for dealing with infants—newborn-sized blood-pressure cuffs and defibrillators, for example—even though a baby would never be delivered in the facility. (The clinic only offers abortions up to 21 weeks of gestation—well before a fetus is viable.) The new rules also dictate the exact temperature of the procedure room (68 to 73 degrees) and the recovery area (70 to 75 degrees), require women to wait two hours in the facility after the procedure, and mandate that the clinic retains an image of the woman’s ultrasound on file.

“Even for Kansas, this is an extraordinarily clumsy, disruptive, disorganized kind of process,” said Brownlie.

In Virginia, the state legislature passed a bill in February that would classify a facility that offers abortion services as a type of hospital, which are subject to the more stringent requirements. The law directed the board of health to issue new rules for the clinics quickly because the measure was passed as an “emergency” provision. The regulations are due by September 15. The state Board of Health, the attorney general, the commissioner of health, and the governor would get some say in whether the regulations are approved, but the emergency status leaves little room for comment from affected clinics and the general public, according to Tarina Keene, executive director of NARAL Virginia, a abortion rights advocacy group.

The Virginia Coalition for Life has urged the state health department to model its rules on those adopted in 2003 by South Carolina, which went so far as to dictate proper procedures for mowing the lawn at facilities that provide abortions. South Carolina’s rules have already sustained a court challenge, which has buoyed hopes among anti-abortion activists that these laws can withstand judicial scrutiny. But, says Keene, many of these rules serve “just to make life extremely difficult, if not impossible, for these facilities.”

Some anti-abortion activists claim that the TRAP laws are not a backdoor way to ban abortions. But groups like Operation Rescue cheer the Kansas law for potentially making Kansas “the first abortion-free state.” Mary Kay Culp, executive director of Kansans for Life, which pushed for the Kansas law (which also passed in 2003 and 2005 but was vetoed both times by then-Governor Kathleen Sebelius), insists that the new regulations are just intended to ensure that abortions are provided in “safe” places. “As far as good health oversight of a medical procedure, these regulations are necessary and long overdue,” she says. But the group’s ultimate goal is to end abortion in the state. “I wouldn’t be unhappy if abortion… if there were no more babies being aborted in Kansas.” She continued: “However, working through the system as we do, we’re working in increments.”