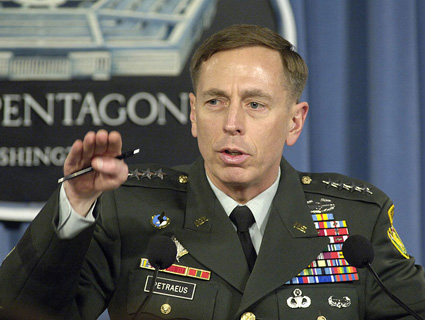 I have a fairy tale for you. Once upon a time, a representative democracy was established with a constitution that distilled the wisdom of the ages. Its foundational principles included civilian control of the military and a system of checks and balances that encouraged vigorous public debate as a basis for effective policy-making.

In this fabled land, the role of civilian leaders was, in part, to serve as a check on military ambition and endless wars. They were to prove cautious, too, in committing their citizen-soldiers to battle, and when they did, they would issue Congressional declarations of war so that everyone could grasp the nature of the national emergency at hand and the necessity of military action. In waging war, they would rely on shared sacrifice and even raise taxes. When necessary, it was their job to rein in or even remove military leaders who acted like Caesar (read: General Douglas MacArthur) rather than Cincinnatus (read: General George Washington).

Yes, you’ve guessed it: it’s not a fairy tale, or at least not completely. It’s the United States—an older America that, despite a decidedly checkered and often imperial past, was nevertheless proud of its reluctance to fight, but steadfast in its commitment to win once it decided that battle was the course of action. Even then, this America remained resolute in its reluctance to embrace a military ethos or bow down before military gods, committed as it was to civilian primacy and the avoidance of a large standing army.

Paradoxically, the last vestiges of this America could still be seen some 50 years ago under President Dwight D. Eisenhower, himself a retired five-star general, who tried with varying degrees of success to limit defense spending, and who famously warned in his farewell address in 1961 of the dangers of a surging “military-industrial complex.”

And leaping forward almost four decades, here’s another paradox for you: prior to September 11, 2001, what many leading pundits and commentators fretted most about was an alleged widening gap between American civilians and their now all-volunteer military. In 1997, Wall Street Journal Pentagon correspondent Tom Ricks typically worried about an all-volunteer military that saw civilians as privileged and flabby, increasingly considered itself a breed apart, and held the public it served in contempt.

Concerned as well was Richard Kohn, former chief historian of the US Air Force. In a special lecture to Air Force Academy cadets in 1999 on “the erosion of civilian control of the military in the United States today,” Kohn worried about a military that openly disrespected President Bill Clinton, its commander-in-chief, even as it meddled in areas like policy-making for which it was not suited and from which it had been excluded by the Constitution.

How times have changed. In the post-9/11 world, a far more insidious problem confronts us. That gap, if it ever existed, is no more. Instead, at the highest levels, what’s civilian and what’s military are increasingly difficult to tell apart as the two spheres blur and blend. Today, civilian control of the military is largely a principle without a meaning, while inside Washington’s Beltway, even with a scorecard it’s hard to tell the players apart.

In the process, the military has gained a kind of unspoken and distinctly un-American primacy. Put another way, after a decade-long budgetary feeding frenzy, the Pentagon has soared, while an eclipsed Department of State, all those civilian diplomats, has been left to eke out a living on budgetary scraps or, as in Iraq today, arm and militarize itself. State, in other words, has become a remora clinging to the predatory shark that is the Department of Defense.

Large and small, symbolic or otherwise, signs of this civil-military blending (with the military significantly running the show) can be found almost anywhere you look. Civilian presidents regularly appear in military flight gear or jackets, as George W. Bush famously did before his “Mission Accomplished” speech on the deck of the USS. Abraham Lincoln in 2003 and as President Obama did on a visit to US troops in Afghanistan in 2010. Military leaders are now regularly put in charge of previously civilian intelligence agencies, as in the case of General David Petraeus, now nominated to leave the Afghan battlefield and become director of the Central Intelligence Agency.

Civilian agencies now militarize themselves and wage war (as the CIA has done or is doing in various drone wars in the Greater Middle East, often in conjunction with the military). America’s part-time citizen-soldiers have morphed into full-time warriors and warfighters, if not the equivalent of foreign legionnaires. America’s civilian embassies continue to morph into so many militarized fortresses protected by armed mercenaries. And above all, among policy arguments in Washington, whether you’re a civilian official or a military one, the choices are increasingly between militarized alternatives—say, counterinsurgency versus counterterror—with that most civilian of all options, peace, not even on that “table” where officials eternally claim that all options are placed.

At the same time, a new civic religion at whose heart is military-worship implores us to “support our troops” (without any concomitant call to uphold our laws and our Constitution). And even as ordinary Americans express serious doubts about the wisdom and cost of an open-ended commitment to Afghanistan—64% of Americans don’t believe the Afghan war is worth fighting, and 73% would prefer sizable withdrawals of US troops this summer, according to a recent Washington Post/ABC News poll—the Pentagon continues to prepare for a future of “two, three, many Afghanistans,” as Michael Klare, defense correspondent for the Nation magazine, noted in April 2010.

Clearly, if we’re not careful, the civilian and military will become the Washington equivalent of Siamese twins, co-joined at the head and, however bitter their internecine arguments, sharing the same underlying militarized thought processes.

To separate such twins is a dicey thing, medically speaking, and no less so politically when the lines between civilian and military authority are being so rapidly erased. Make no mistake, as President Obama is wont to say, the impact of this erasure has been devastating.

Sensible and logical, yes, but such arguments have been made—and roundly ignored. They aren’t given the time of day among serious policy types in Washington, where to question the efficacy and legitimacy of the forces and tactics being used is simply not acceptable. Sharing one brain and one ethos means being incapable of grasping one’s own militarized rigidity or truly recognizing the perils that have been unleashed on this nation.

There’s a word for this disease, even if after all these years it remains remarkably foreign to American ears: militarism. When Americans think of that word, they tend to conjure up images of fanatical jackbooted Nazis or suicidal Japanese kamikazes, and so the concept seems eminently dismissible. But militarism also describes a situation in which a country’s civil society and political culture are permeated to the point of dominance by military attitudes and values—an undeniable fact of life, I would argue, in America today.

Militarists see war as productive, as offering solutions rather than posing problems. They see it as heroic. (President Bush famously waxed poetic about the “exciting” and “romantic” nature of fighting in Afghanistan.) When wars are romanticized as action-packed tests of a nation’s warriors, cuts to war spending are naturally seen as perfidiously unpatriotic—as kneecapping those same heroes. Hence our ever-growing “defense” budgets, even as a sledgehammer of a national debt hobbles America’s economic vitality and social security.

The end result of this militaristic mindset is a garrison state, constantly girding itself for national security crises, real or perceived, as in the last decade’s open-ended and frantic “war on terror.”

A singular danger of such a mindset, as pointed out by Laurence Radway in a telling article on “militarism” in the International Encyclopedia of the Social Sciences, is that militarists, unable to select means appropriate to true defense needs, end up jeopardizing the very national security they say they’re seeking to safeguard. By exaggerating threats, defining all responses to those threats in military terms, dismissing dissenters as weak and deluded (even when they prove right), and being incapable of questioning their principles, they repeat the same mistakes again and again.

Until Americans turn away from militarism and learn again how to “support our Constitution” more than our troops (and don’t worry: those troops swear an oath to that very Constitution), until we return to a broader vision of national security that deemphasizes a garrison mentality, we will continue to wound, perhaps mortally, a once great republic.

And that’s no fairy tale, it’s a fact.

William J. Astore is a retired lieutenant colonel (USAF), professor of history, and TomDispatch regular. He welcomes reader comments at wjastore@gmail.com. To stay on top of important articles like these, sign up to receive the latest updates from TomDispatch.com here.