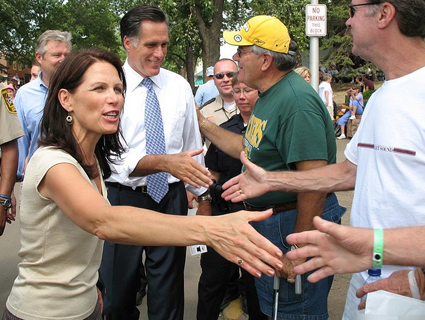 CNN has an interview up today with Ed Rollins, the veteran conservative political consultant whom Rep. Michele Bachmann (R-Minn.) has tapped to run her presidential campaign. Rollins, who guided Mike Huckabee’s campaign to a victory in Iowa in 2008, predicts that the Minnesota GOPer’s campaign will take more or less the same approach. That’s not surprising; this is surprising:

Asked about Bachmann’s past controversial comments, Rollins said the congresswoman would “have a good team around her and we’ll basically make sure that everything is 100 percent fact checked.”

Fact-checking is all the rage these days; even Cosmopolitan is doing it! But it’s also tedious and time-intensive; to give you a sense, it took me three weeks to nail down all of the details in this article about imported insects that eat invasive plants. If Rollins really wants to 100-percent fact-check everything his candidate says before she says it, that’s fantastic. It would probably be a first in American political history—and given Bachmann’s record, a Herculean task.

It’s also unclear just which comments Rollins intends to fact-check. CNN’s link to “past controversial comments,” for instance, actually directs you to a Bachmann gaffe in which she says the American Revolution began in New Hampshire. That’s wrong, but it’s not “controversial.” Controversial would be saying something like “almost all, if not all, individuals who have gone into the [gay] lifestyle have been abused at one time in their life, either by a male or by a female”—which Bachmann did say, in 2004, in the same speech in which she expressed the hope that a breast-cancer-stricken Melissa Etheridge would take advantage of her illness to quit being a lesbian.

And then there’s the sheer scope of Bachmann’s factually challenged statements, which, even in the political world, are in a category of their own. Bill Adair, editor of PolitiFact, recently told Minnesota Public Radio that “we have checked her 13 times, and [found] seven of her claims to be false and six have been found to be ridiculously false.” That’s a pretty bad record, and according to Adair, Bachmann remains the only high-profile conservative politician to never have a statement ruled “true” by the outfit.

Bachmann could stop serving up apocalyptic, overheated rhetoric to socially conservative audiences. But as Rollins knows, that’s no way to win in Iowa. Plus, with all the time and energy devoted to double-checking statistics, verifying quotes, and tracing everything back to at least one primary source, would there even be any time left to campaign?