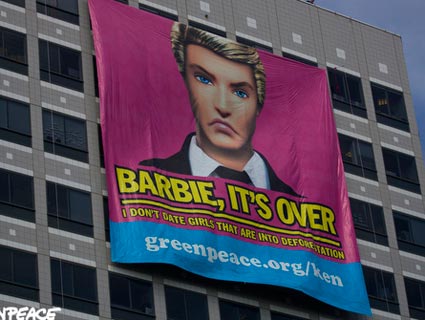 A few weeks ago, Mattel announced that Barbie wants a green dream house. Perhaps it’s because she’s spent so much time in environmentally deplorable digs.

According to a Greenpeace investigation, Barbie dolls are among the many toys on the market whose packaging contains fibers that originated in the ecologically fragile (and mightily abused) Indonesian rainforest, which is home to a vast array of creatures including tigers, rhinos, and orangutans. Greenpeace sent samples of Barbie packaging to IPS Testing, a paper analysis lab, which confirmed that the sample contained fibers of mixed tropical hardwood. According to Greenpeace, this particular wood blend is a telltale sign that the paper originated in Indonesia, since that’s the only place that produces it in large volumes. Greenpeace also dug up several certificates (PDF) that show that Mattel has purchased paper from a middleman for Asia Pulp & Paper, a gargantuan paper supply company whose many misdeeds in Indonesia have prompted American retail chains (including Staples, Office Depot, and Target) to quit buying from APP for good. I wrote about APP’s weird ties with the tea party here.

Although Mattel hasn’t yet responded to Greenpeace’s accusations, there’s been some back and forth between the two groups. In March, Greenpeace wrote to Mattel, asking the company about its paper sourcing policies. Two months later, Mattel responded:

We specify that our catalogs are printed on paper containing at least 10 percent post?consumer waste, and we encourage consumers to share and recycle them. For other printed materials, we generally work with paper suppliers and the printers that can make recommendations on latest FSC?approved paper stocks that meet the needs of our specific project. In addition, we have reduced our use of paper through socializing conservation measures with our employees and reducing the size and number of corporate reports we print by moving to digital solutions.

So yeah, the elephant in the living room is, uh, the packaging.

More bad news: Even if you’ve banished Barbie from your house, it’s likely at least a few of your toys are made by companies on Greenpeace’s list of rainforest-unfriendly manufacturers: Some Disney, Hasbro, and LEGO packages were all found to contain Indonesian fibers. LEGOs! And here I thought they could do no wrong!