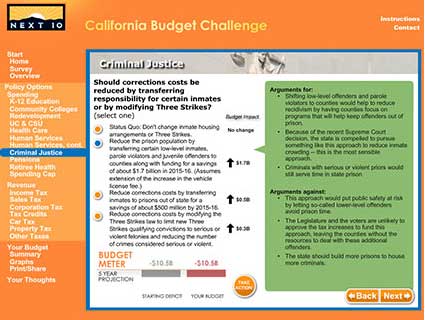 In recent months, several media outlets and nonprofits have launched online budgeting tools that put us lay folk up to the task of balancing the government’s checkbook.

In November, the New York Times introduced its “You Fix the Budget” tool, a simulator that lets online readers tackle the federal budget. MinnPost, the Los Angeles Times, and Cleveland’s Plain Dealer have launched similar initiatives for state budgeting, sending users a-hacking at expenditures and upping taxes via checkboxes and sliding cursors. (If only making fiscal policy was actually this straightforward.)

Yesterday, Next10—a California nonprofit—unveiled the revised version of its own budget simulator. While the organization has hosted the online tool for the past seven years, revising it annually to reflect the state’s current legislature proposals, this year’s scorched-earth budget battle makes it especially timely. With K-12 and higher education, health care, and a wide range of social programs on the line, concerned voters can pick and choose through a variety of options toward a balanced budget. Check it out. Nifty, no?

Next10 officially revealed its updated version at a San Francisco budget forum Thursday. There, participants learned about the different proposals the legislature is considering—and took part in a live run using hand-held clickers to vote, multiple-choice style, on the proposals.

The online tool works similarly. Users have to consider spending across many realms—from schools and health-care plans to California’s troubled prison system. Each policy problem offers a handful of potential solutions which, conveniently, they can learn about before voting—because next to each question, there’s a sidebar with background on that policy initiative.

Next10 is nonpartisan, and its budget simulator reflects this. Beyond the background data, every potential policy move contains a built-in list of pros and cons, based on arguments that have been made for or against. Just mouse over each item and voilà—up pops a green bubble, where some tough and time-consuming reasoning has already been done for you.

All in all, it’s a pretty cool—and heartily diplomatic—widget. Given the dubious online practices of some folks in government, such a positive use of political technology is certainly refreshing.