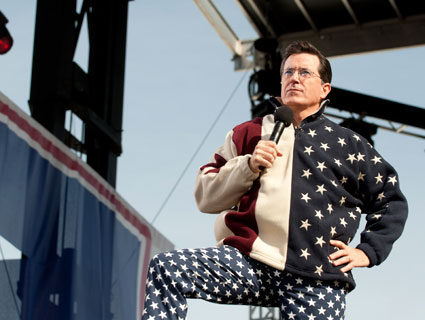 When Stephen Colbert created his own so-called super PAC and said he planned to use his satirical Comedy Central show to promote it, he seemed to be using that age-old shtick—parody—to highlight the growing political power of corporations after the Supreme Court’s Citizens United decision. At the least, his ploy would bring some attention to the nation’s dysfunctional political money watchdog, the Federal Election Commission (FEC).

So last month the television host, in his bombastic conservative persona, asked the feds to let him use staff, equipment, and airtime from his show to help his PAC without having it count as a political contribution from Comedy Central’s parent company, the media giant Viacom. (Viacom doesn’t want to be in the business of donating to Colbert’s PAC.)

Today Colbert got what he wanted—sort of. The FEC ruled this morning that Viacom resources can be used to fund “Colbert Super PAC” ads or promotions without the PAC having to report them as corporate donations. But there’s a catch: those ads can only appear on Colbert’s eponymous show. Any Colbert Super PAC ad that appears elsewhere, the FEC ruled, must be reported as a campaign contribution—something Viacom wants no part of.

Here’s the legal background. Campaign finance law includes something called the “media exemption.” This applies to corporate-owned newspapers, magazines, TV outlets, and other publications that run stories, editorials, and commentary backing a candidate. The exemption says that spending doesn’t count as a corporate contribution because it’s for a legitimate media purpose.

However, reformers and good government groups argued (PDF) Colbert’s PAC doesn’t fall under the “media exemption.” Colbert’s a satirist, not a reporter. His plan to use “Colbert Report” resources to pump out ads and billboards for his PAC goes beyond Viacom’s role as a news company, and so shouldn’t be covered by the media exemption, they said. As such, any work done by Colbert’s staff or using Viacom resources should be reported as donations, they maintained.

In the end, the FEC gave Colbert his media exemption, but in the narrowest possible way. The decision was lauded by reformers increasingly piqued by the FEC’s actions. As I wrote earlier this year:

Ask experts and good-government groups about the decline of the FEC, and they’ll inevitably give you an earful about the Freedom’s Watch controversy. Or they’ll explain how the percentage of groups disclosing their donors has plummeted by more than 60 percent since 2004 (PDF). Or they’ll lament how, more than a year after the Supreme Court’s Citizens United decision, the FEC has barely begun debating what it means.

Crippled by the kind of paralysis that makes Congress look like a well-oiled machine, the FEC is a shell of a watchdog at a time when more money is gushing into American politics than ever before. “The Federal Election Commission is a national scandal,” says Fred Wertheimer, president of the campaign-finance reform group Democracy 21. “We have no enforcement of the campaign-finance laws.”

Gridlock tops the list of the FEC’s problems. In the mid-2000s, the FEC deadlocked on about 1 percent of enforcement actions against alleged violators of campaign finance law. But by 2009, the commission’s deadlocked votes spiked to 16 percent, dipping only slightly to 11 percent in 2010. Reformers blame the three conservatives on the six-person commission for clogging up the system, blowing open new legal loopholes, and sometimes even refusing to enforce the laws on the books.

But in the eyes of reformers, the FEC’s narrow decision was the right one. “This is the way the law is now,” says Fred Wertheimer, president of Democracy 21. In a statement, Tara Malloy, associate legal counsel at the Campaign Legal Center, said, “The impact of today’s opinion by the FEC goes beyond Mr. Colbert and his well-known satirical show, and ensures that the numerous television show hosts and commentators who are serious politicians cannot exploit the press exemption.”