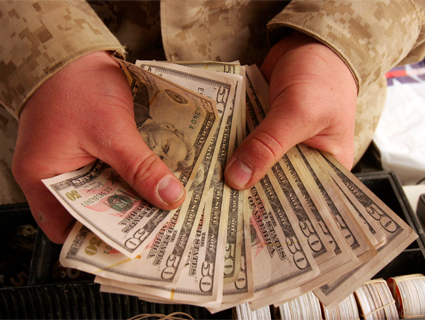 Rep. Buck McKeon (R-Calif.), the chairman of the House Armed Services committee, talks a tough line on the defense budget. Members of his committee, as well as “the broader Congress—and the nation—must make tough choices in order to provide for America’s common defense,” he said when unveiling the panel’s budget plan a little less than a month ago. He was echoing the House GOP’s talking points on cost-cutting—an agenda that had spurred Speaker John Boehner (R-Ohio) to target earmarks last year. “Earmarks have become a symbol of a Congress that has broken faith with the people,” the incoming speaker proclaimed last November, after his incoming majority banned the age-old maneuver of sneaking pork spending into budget bills. Since then, McKeon has repeatedly declared how he and his colleagues have slashed fat from the Pentagon’s and White House’s military budget requests.

However, as it stripped money from the proposed budget, McKeon’s committee quietly set aside $1 billion in a newly created fund, buried within section 1433 of its 920-page bill under the heading “Other Matters.” Called the Mission Force Enhancement Transfer Fund, the money is ostensibly held in reserve so that the DOD can fund necessary projects at its discretion. In fact, the House budget would funnel more than $650 million from the MFET back to representatives’ pet projects. Critics say this stealthy bit of accounting violates the House leadership’s ban on earmarks and is little more than a “slush fund” for pork-barrel spending.

Details on the size or beneficiaries of the projects funded by the MFET are hard to discern from the defense bill’s lengthy list of procurements. But armed services committee members on both sides of the aisle have left clues. In the days following the voice vote approving their budget, they pumped out press releases trumpeting the projects they’d scored for their districts. Since the MFET funds came from other cuts in the Pentagon budget, the members could claim their projects would be offset by spending cuts elsewhere. Rep. Allen West (R-Fla.), a tea party freshman who sees himself as a budget hawk, secured $8 million for engines for Army drones, funded by savings from “wasteful DOD offsets.” Rep. Chris Gibson (R-N.Y.) bragged that he’d secured a federal study to open a nanotechnology lab on the SUNY-Albany campus in his district, as well as $7 million in funding for additional nanotech research. Rep. Martin Heinrich (D-N.M.), announced $3 million in funding for a nonprofit called the Technology Ventures Corporation, which would “help expand innovation in New Mexico’s emerging satellite industry.”

These moves have angered deficit hawks from both parties. The new fund’s workings are so mysterious that even the congressional rank and file have only a vague sense of where the money’s going. It “not only circumvents the current moratorium [on earmarks] but is actually less transparent than the earmarking process that was in place prior to the moratorium,” complained Rep. Claire McCaskill, a Missouri Democrat who is aligned with some tea party Republicans in opposing the fund’s creative accounting methods. “This is disappointing and disingenuous.” McCaskill sent a brusque letter (PDF) to McKeon and Rep. Adam Smith (D-Wash.), the ranking Democrat on the armed services committe, decrying the MFET kitty as a “slush fund” for earmarks cobbled together from “unexplained and unjustified” cuts elsewhere.

Rep. Jeff Flake, a conservative Arizona Republican, also expressed dismay over the scheme. “To identify a billion dollars in savings, then to move it into a new fund and then allow members to designate their own priorities and take $650 [million]—I am just not sure what this is all about,” he said on the House floor. In sponsoring an amendment to apply the fund’s unspent balance—about $350 million—to paying down the national debt, Flake cited news reports describing the fund as a pet-project jackpot. “This would be similar to the earmarking culture that we have had around here, a culture that hopefully has ended and that we can move beyond,” he said. “So I hope this is not what we are seeing here.” Asked whether Flake considers the MFET funding to be earmark spending, a spokeswoman for the representative would only say that “Congressman Flake has some concerns and is working to get them addressed.”

Does the MFET fund violate the spirit of the earmark ban? “It violates a lot more than the spirit,” laughs Winslow Wheeler, director of the Straus Military Reform Project at the Center for Defense Information and a former staffer for senators from both parties. The current defense bill contains earmark-style procurements, just like all its predecessors, he says. “The only difference is that we don’t even have the cursory nod toward transparency that we did in the earmark process,” he asserts, referring to former Speaker Nancy Pelosi’s requirement that members disclose their pet Pentagon projects. “It’s a real step backwards.”

Armed Services Committe chairman McKeon defended the MFET funding scheme on the House floor, saying the cash would only be spent “in furthering national security objectives” with Pentagon approval. “If we find any member pressuring the Department of Defense to use any funds other than to comply with competitive, merit-based solutions, we will go after them,” he said.

That’s plausible deniability, says Wheeler. While the Defense department has control over the fund on paper, members of the armed services committee can use their sway with informal military contacts to funnel the dollars straight to their pork projects. “If it survives the legislative process,” he says, “the Pentagon will start getting phone calls and letters saying, ‘Of course, the appropriations budget actually meant this.'”

The plan’s survival is not assured. The Senate is expected to come up with its own defense budget proposals this month, and whatever bill it passes will have to be reconciled with the House plan before heading to President Obama’s desk. In the meantime, debate over the House’s fund for stealth earmarks could further inflame tensions between veteran Republicans and their junior tea party colleagues. “An awful lot of activists in the tea party movement are veterans who had hands-on experience with wasteful and inefficient spending in the Defense Department,” Dick Armey, the former House majority leader and cofounder of the tea party group FreedomWorks, told Bloomberg earlier this week. “If you think you can sit in office and be a zealot on cutting everything except your pet projects, it don’t work that way.”