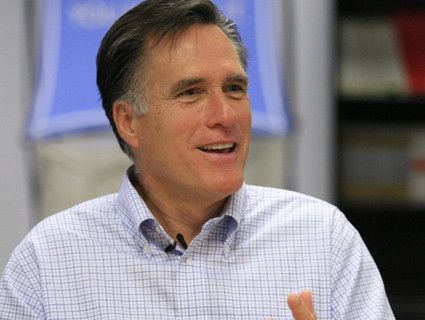 Certain political ads are hard to fact-check—but that doesn’t make them accurate.

Before the Republican presidential debate in New Hampshire on Monday night, Mitt Romney’s campaign released a spiffy campaign video/ad that had all the politico wags going gaga. It was a slap at Obama—but it also provided Romney’s fellow GOP presidential wannabes with ammo to use against him.

The less-than-two-minute-long spot notes that “millions have lost their jobs under President Obama” and jabs at the president for recently stating, after the release of a lousy jobs report, that “there’s always going to be bumps on the road to recovery.” The video then shows about 15 people—of all shapes, sizes, and colors—lying, face-up, on a desert highway in what appears to be the middle of nowhere. One by one they rise, stare into the camera and hold up a Romney campaign placard with a shorthand description of their particular plight handwritten on it. “Mark” notes, “I want a job when I graduate.” “Shirley” reports, “Over 50, starting over.” “Kevin” proclaims, “The company I worked for just went bankrupt.” And each of them solemnly intone, “I’m an American, not a bump in the road.”

When the non-bumps finish, the music swells, the camera pans toward the heavens, and these words appear: “Believe in America. November 6, 2012.”

The message: Obama doesn’t care about you; Romney does. And at the debate on Monday night, Romney proclaimed that Obama has “failed the American people on jobs creation.”

This is all in keeping with the general notion sweeping GOP circles that the best way to beat the president next year is to not be the president. That is, any GOP nominee who can pose credibly as the non-Obama—without having to defend a boatload of negatives about him- or herself—will have a decent shot. Which may well be true.

Yet there might be some restraints on how far any candidate can depart from his or her own background to assail the president. This Romney video implies that he gives a damn about the “bumps in the road”—meaning typical American workers. His record as a former head of Bain Capital, a private equity firm that bought and sold firms, though, is at odds with this characterization. Here’s how the conservative New York Post recently characterized his tenure at Bain:

The former private equity firm chief’s fortune—which has funded his political ambitions from the Massachusetts statehouse to his unsuccessful run for the White House in 2008—was made on the backs of companies that ultimately collapsed, putting thousands of ordinary Americans out on the street. That truth if it becomes widely known could become costly to Romney, who, while making the media rounds recently, told CNN’s Piers Morgan that “People in America want to know who can get 15 million people back to work,” implying he was that person.

Romney’s private equity firm, Bain Capital, bought companies and often increased short-term earnings so those businesses could then borrow enormous amounts of money. That borrowed money was used to pay Bain dividends. Then those businesses needed to maintain that high level of earnings to pay their debts.

In 2007, the Los Angeles Times reported:

Critics note that Romney’s tenure as CEO of the leveraged buyout firm Bain Capital resulted in the loss of thousands of jobs through layoffs and bankruptcies. Romney, the wealthiest candidate in the 2008 presidential race, ran Bain Capital from 1984 to 1999, during which time he earned the bulk of his fortune.

Bain Capital specialized in buying companies in distress and revamping them, often by cutting jobs and closing plants. Some of Bain’s purchases became more efficient and successful businesses, while others, loaded with debt from Bain’s fees, were forced into bankruptcy, costing more jobs.

That same year, the Boston Globe reported on a Bain deal involving a firm named Ampad, noting that Bain Capital

slashed jobs at the office supply manufacturer stands in marked contrast to his recent pledges to beleaguered auto workers in Michigan and textile workers in South Carolina to “fight to save every job.”

Throughout his 15-year career at Bain Capital, which bought, sold, and merged dozens of companies, Romney had other chances to fight to save jobs, but didn’t. His ultimate responsibility was to make money for Bain’s investors, former partners said.

Much as he did when running for Massachusetts governor, Romney is now touting his business credentials as he campaigns for president, asserting that he helped create thousands of jobs as CEO of Bain. But a review of Bain’s investments during Romney’s tenure indicates that job growth was not a particular priority.

When Romney was in the public sector, as governor of Massachusetts, his record on jobs creation was not much better. After he claimed during a GOP primary debate in 2008 that while he was governor, “we kept adding jobs every single month,” Factcheck.org noted “that’s just not true.” Moreover, the political fact-vetting site reported:

Romney’s job record provides little to boast about. By the end of his four years in office, Massachusetts had squeezed out a net gain in payroll jobs of just 1 percent, compared with job growth of 5.3 percent for the nation as a whole.

Romney’s latest ad, an impressionistic powerhouse, cannot be vetted in similar fashion, for it asserts no facts about Romney or his past actions while in the executive suite at Bain or in the state house in Boston. Team Romney is delighted with the spot, believing that this sort of attack will force the Obama crowd to respond by contending that the economy isn’t that bad or that things could be worse—assertions that turn off already skeptical and anxious independent voters.

But the video does depict Romney as something that is out of sync with his history: a champion of jobs creation. And this is a claim that can be used by his GOP rivals (when they tire of bashing Romney for enacting a health care insurance mandate in the Bay State). Their oppo research folks can read the above-mentioned stories and formulate the easy criticism: when he had the chance, Romney did not evince concern for the “bumps.” A prominent challenge for Romney, the supposed frontrunner, has been authenticity, as he has flip-flopped on critical issues (gay rights, gun rights, abortion) to better position himself to win a GOP contest. Yet as he tries to exploit the issue of jobs, he risks drawing attention to his own past as a corporate bulldozer who rode over bumps in the road on the way to profits. In fact, there’s an ad just waiting to be made: real people who lost their jobs, on a desert highway, noting that Romney and Bain stranded them.