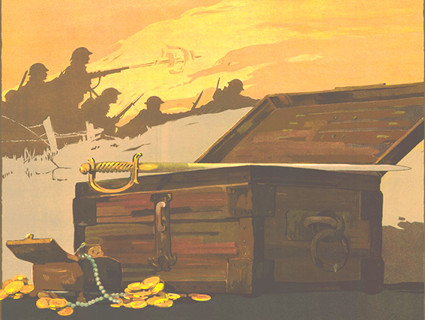 Among the few sure things in life, there’s this: A 920-page defense budget bill affords your member of Congress plenty of space to shove some weird amendments into. From deep-sea booty and fancy flight suits to rescuing 200-year-old corpses from Libya, here’s a rundown of not-so-fiscal budget riders among the 152 amendments that were okayed when the House Armed Services Committee approved its version of the 2012 military financial plan (PDF) last month:

In its own words: “Would clarify the language of the Sunken Military Craft Act to restore its original intent.”

What that means: This has some marine treasure hunters in Mack’s home state excited. A team of Tampa-based shipwreck explorers is fighting the Spanish government to keep 17 tons of booty from a galleon that sunk in 1804. WikiLeaks documents show Spain has worked on a back-room negotiation with the State Department, but the explorers say the $500 million in coins and artifacts belong to them, since the Spanish navy ship was on a commercial mission when it went down. Mack’s friendly “clarification” would put some extra wind in those explorers’ sails.

In its own words: “Would require the Department of Defense to repatriate, identify and honor with a military funeral the remains of 13 American Sailors killed during the First Barbary War in 1804. These Sailors are currently buried in a decaying mass grave in Tripoli, Libya.”

What that means: “The United States has an obligation to leave no member of our military behind, regardless of how long ago they were killed,” says Rogers, calling the long-buried sailors “precursors to today’s Navy Seals.” Okay, but can this wait until the whole Qaddafi/Libya thing blows over?

In its own words: “Would prohibit any funds made available by this Act from being used to research, develop, manufacture, or procure a newly designed flight suit for members of the Armed Services.”

What that means: For some time, the Air Force has been trying to develop what it calls an “integrated aircrew ensemble” for all of its aviators. Ex-airman Kinzinger’s response: “While the goal of increased comfort and integrated protection for the pilot is laudable, I don’t believe that this is urgently needed by the Air Force, particularly in this budget environment.” Kiling the G-money G-suit could save $100 million over seven years.

In its own words: “Would prohibit the unauthorized use of names and images of living and deceased military service members on merchandise and retail products without first obtaining permission from the service member or, if deceased, their family.”

What that means: The makers of the Gen. George S. Patton Jr. bobblehead doll will not be pleased about this.

In its own words: “Would direct the Secretary of Defense and the OMB to identify programs within the DoD budget that are ineffective, redundant or unused.”

What that means: The defense secretary already has an expansive program to target waste and repetition, which makes this amendment sort of redundant. Come to think of it, the Pentagon’s got another entire office that works on efficiency, too. Which also seems sort of redundant. Also.

What that means: Great Sousa’s ghost! We’re spending $200 million on military bands? Actually, the DOD told McCollum that it currently spends $320 million on its marching parade regalia; the Washington Post says it might be closer to half a billion bucks. “It’s time to ask the Pentagon to make a small sacrifice in their own musical budget,” McCollum argues. Perhaps this will be more successful than her recent effort to reduce the Army’s NASCAR advertising budget.

In its own words: “Would designate Taps as the National Song of Remembrance and prescribes procedures during the sounding of Taps.”

What that means: “I am unaware of any anti-Taps lobby pushing for some other song to be named in its place,” says a Reed aide. What about Betty “No Bands” McCollum?

In its own words: “Would direct the Secretaries of the military departments to conduct a review of military service records to determine whether certain Jewish American war veterans, including those previously awarded the Distinguished Service Cross, Navy Cross, or Air Force Cross, should be awarded the Medal of Honor.”

What that means: “Thousands of Jewish soldiers served bravely in defense of our nation during World War I but unfortunately discrimination at the time denied many of them certain military honors,” Luetkemeyer says. What a mensch.

Plus: Freshman Republican Justin Amash (Mich.) failed in his attempt to strike section 1034 of the defense bill, a force-use provision that authorizes “worldwide war without end, and without clear enemies,” according to the ACLU. Alex Jones-listening patriots fear section 1034 could “make Obama the US king“; one asserts that “this clause was inserted after the staged ‘killing’ of Osama bin Laden in an effort to ensure the Global War on Terror continued after his alleged demise.”