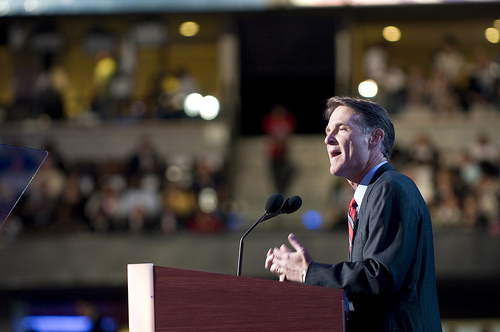 Not long after announcing his plans to retire in 2010, then-Sen. Evan Bayh (D-Ind.) offered this bit of commentary on why he’d opted to leave Congress after two terms in office: “I want to be engaged in an honorable line of work.” It was taken as a biting critique of the increasingly polarized and dysfunctional Senate, and a hint that Bayh’s post-Senate plans might include a quiet career in academia, away from politics.

Now Bayh is eating his words. As iWatch News‘ Peter Stone reports, Bayh has signed on with one of the most corporate-friendly, anti-environment shops in all of Washington, DC: the US Chamber of Commerce. According to an internal memo penned by Chamber president Tom Donohue, Bayh, along with former Bush White House chief of staff Andy Card, are now part of the Chamber’s anti-regulation messaging team, doing “speeches, events, and media appearances at local venues.”

The Chamber’s hiring of Bayh, a big name in Washington circles, will only help its efforts to delay or kill new regulatory legislation in Congress. Indeed, Donohue’s memo touts how the Chamber has filed legal briefs to challenge the validity of President Obama’s health care reform bill; successfully delayed a new Securities and Exchange Commission rule on giving shareholders a say on corporate directors; unveiled plans to undermine the clout of the fledgling Consumer Financial Protection Bureau; and delayed a rule forcing companies to disclose when they use conflict minerals from the Congo in their products. Bayh and Card, the memo says, will help the Chamber push this pro-corporate agenda in Washington and beyond.

Tom Collamore, who is handling communications for the regulatory advocacy drive told iWatch News that Bayh and Card will participate in a conference call next week with a few hundred members of the Chamber’s grassroots network to discuss plans and messaging. Collamore added that on June 22, the Chamber will formally announce the Bayh and Card road show and then “we’ll fly these guys around.”

For the Chamber, the team of Bayh and Card is a big catch: it could help gin up pressure on moderate Democrats in Congress for regulatory relief.

“We don’t see this effort as an ‘us versus them’ issue,” said Collamore. “Having a Democrat of his stature gives the effort more heft and an important perspective.”

Then again, it’s not entirely surprising to see Bayh go to work for the Chamber. After all, his first gigs out of politics before the Chamber were at a massive private equity firm and as a contributor at Fox News. So much for teaching.