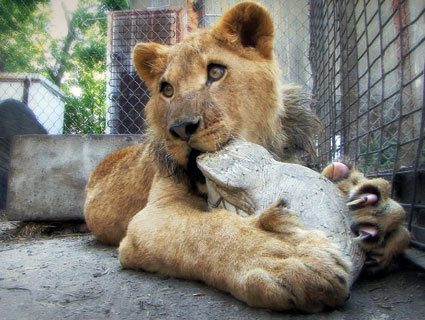 The Elephant in the Living Room

Don’t be misled: The only animals you’ll see in a living room in this doc are a cougar and a Burmese python. (The runaway—slitheraway?— Gabon viper is nabbed in a garage.) Director Michael Webber‘s fast-moving, bittersweet film reveals a world of dangerous and entirely unregulated pets (lions, tigers, bears) raised behind closed doors. Much of the action takes place in suburban Ohio, a state that rivals parts of Florida for nuisance alligators. Hidden cameras rolling, we attend a reptile show where dads cart off snakes that could devour their offspring. But the real drama lies in the interplay between a passionate cop who moonlights as an exotic-animal rescuer and a sympathetic sadsack who can’t bear to part with his full-grown African lions. The cat owner’s tear-jerking travails drive home the filmmaker’s point better than any finger-wagging activist ever could.