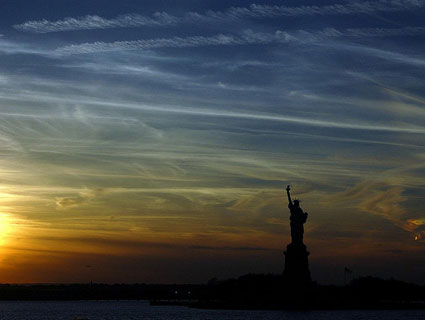 "Keep ancient lands, your storied pomp!" cries she / With silent lips. "Give me your tired, your poor, / Your huddled masses yearning to breathe free, / The wretched refuse of your teeming shore. / Send these, the homeless, tempest-tost to me, / I lift my lamp beside the golden door!" | Or, you know, don't.<a href="http://www.flickr.com/photos/12614773@N07/2617630055/sizes/z/in/photostream/">jordi.martorell</a>/Flickr

Senator John McCain (R-Ariz.) took some heat this weekend for blaming wildfires in Arizona and New Mexico on illegal immigrants. McCain has since recanted (sort of), claiming that he was merely repeating what an unnamed Forest Service official told him in a briefing.

McCain’s comments are just the latest example of our country’s habit of blaming all manner of problems on immigrants. Let’s take a look at a few recent instances of illegal immigrants becoming scapegoats for… well, you name it:

Immigrants must be exhausted after leaving their foreclosed homes in pot-laden cars, crashing in standstill traffic on their way to the ER, hacking and wheezing, and then tossing their used Kleenex out the window!