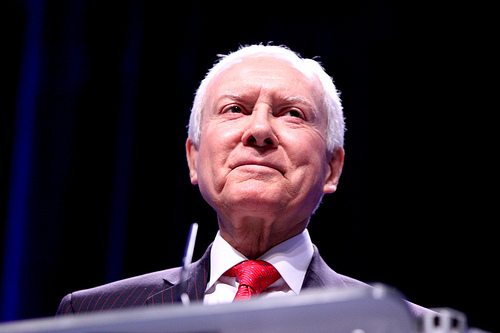 What does the Korean free trade agreement have to do with abortion? You got me. But Sen. Orrin Hatch (R-Utah) plans to offer an amendment in today’s markup of a handful of trade bills in the Senate Finance Committee that would bar Medicaid funding for abortions.

The amendment is described as seeking “to close the loophole that sends taxpayer dollars to fund operational costs for abortions.” It would block Medicaid dollars from being used at “any entity that performs abortions or maintains or operates a facility where abortions are performed.” It’s hard to begin on how bad this would be. Basically, any facility that offered abortion for any reason—even a hospital providing it as life-saving emergency care for a woman—would not be able to accept Medicaid payment. The effect would be that hospitals and clinics that currently offer abortion would likely stop doing so in order to be able to continue accepting Medicaid money, and the low-income women who rely on Medicaid would be effectively denied abortion coverage entirely.

Of course, if it did pass (which it probably won’t), it could conflict with other laws that bar discrimination among health care providers. When Indiana tried to block Medicaid funds from being used at Planned Parenthood last month, it was blocked by the feds because it’s illegal to discriminate among health care providers. The state is appealing the court injunction that blocks it from taking effect, but it’s not likely that the law is going to hold up.

Rather ironically, the Republican communication staff for the Finance committee, on which Hatch sits as the ranking Minority member, sent out a press release today criticizing the committee Democrats for “including unrelated and highly-controversial provisions” in today’s markup by adding a domestic spending program to the list of measures to be considered. Hatch’s office declared that move “partisan” and an “abuse” of the trade authority of the committee. At least that provision had something to do with trade.