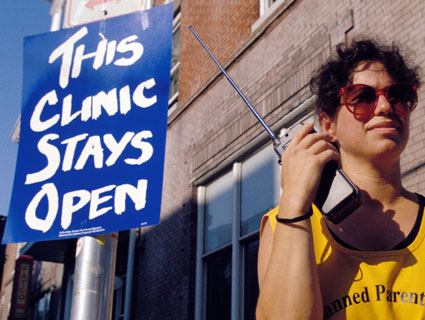 Two weeks ago, the Kansas Department of Health and Environment issued a new set of stringent guidelines for abortion clinics. Under the new requirements, the three remaining clinics in the state would have to make enormous structural changes to their buildings and obtain new certifications in just two weeks or face possible closure. These types of laws are known as Targeted Regulation of Abortion Providers (TRAP) laws, and critics say they’re intended to make it almost impossible for clinics to operate.

But despite the new rules, abortion rights activists aren’t giving up: On Tuesday, the Center for Reproductive Rights (CRR) filed a federal lawsuit on behalf of one of the remaining Kansas clinics, the Center for Women’s Health, which is run by a father/daughter duo who practice in Overland Park.

In a complaint filed in federal court in Kansas City, physicians at the Center for Women’s Health claim they weren’t given the final instructions about the new regulations until June 17, and that they were ordered to adhere to the guidelines—which included things like number, type, and dimension of rooms—by July 1. They were then denied a temporary license based on an existing law that would allow them to request waivers. Dr. Hodes and Dr. Nauser, the team operating the clinic, “cannot meet these requirements without rebuilding their office from the ground up,” according to a press release.

The guidelines are so harsh that they sometimes verge on parody; one requires that abortion offices come equipped with pediatric-sized ventilation masks, cannulas, and other instruments even though the clinic’s doctors do “not have child-aged patients, do not deliver babies in their office, and only perform abortions there prior to fetal viability.” The CRR suit argues that many of the requirements are “ambiguous and unclear.” But even though the guidelines would force some clinics to rebuild, the Kansas Department of Health issued a statement claiming that the new guidelines “should not impose any unusual cost on regulated providers or consumers of provider services.”

In its suit, the Center for Reproductive Rights argues that the new rules come at the expense of due process, among other things. As for Kansans, if the health department gets its way, the cost to them may be living in a state that does not have a single clinic where abortions can be performed safely and legally.