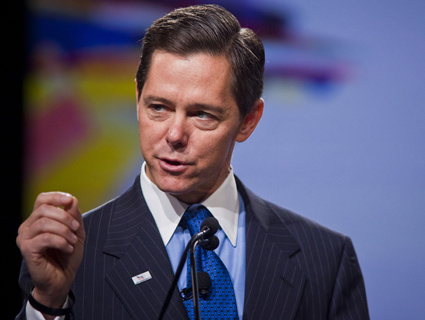 The great thing about politics is that it seems there are few scandals large enough to permanently knock someone out of the business permanently. Exhibit A is this week’s Faith and Freedom Conference, organized by none other than disgraced GOP foot soldier Ralph Reed, where virtually ever GOP presidential contender will be trying to court evangelical voters. It wasn’t so long ago that Reed, the former head of the Christian Coalition, was getting shellacked in a 2006 race for lieutenant governor of Georgia in no small part because of his close ties to the felonious lobbyist Jack Abramoff.

Reed, you will recall, raked in more than $4 million from Abramoff in 2004 to rally Christian voters to fight Native Americans who wanted to open some casinos. Abramoff was representing different tribes who already had casinos and wanted to cut out the competition, and he paid Reed to help in the fight by making gambling a religious issue. Abramoff was eventually convicted of mail fraud and conspiracy and sentenced to six years in prison (he served three, getting out early last year).

Emails released during the criminal investigation did not reflect well on someone who Time dubbed “The Right Hand of God” in 1995. In many of them he’s pressing Abramoff to send him clients—and cash. “I need to start humping in corporate accounts!… I’m counting on you to help me with some contacts,” he wrote in one. The emails also suggested he had lied about how much he knew about what Abramoff was up to. Reed was never prosecuted or accused of being more than a greedy political consultant, but his downfall among evangelicals and other politicians was pretty fast and furious.

All of that seems like ancient history today, though, as Reed has somehow managed to persuade virtually every Republican hoping to occupy the White House to star in his new show. His Abramoff ties notwithstanding, Reed was a formidable organizer in his heyday. He once described his special approach to mobilizing white, evangelical voters like this: “I want to be invisible. I do guerrilla warfare. I paint my face and travel at night. You don’t know it’s over until you’re in a body bag. You don’t know until election night.” The GOP candidates are apparently hoping that Reed, nearly 50, can still run the ground war.

Mother Jones will be live-tweeting the conference here, so follow along.