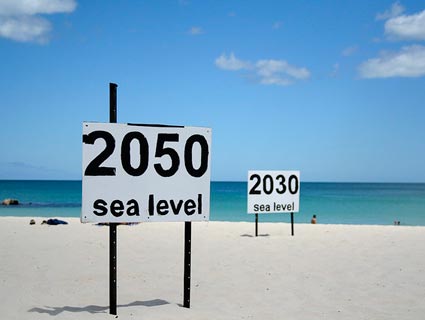 The science behind a new report in the Proceedings of the National Academy of Sciences journal is complicated, but the evidence is more precise than it has ever been: Sea levels are now rising at a faster rate than they were at any time in the past 2,000 years. For much of the two millenia measured in the study, sea levels were either stabilized or rising at .25 millimeters per year. But right around the end of the 19th century, sea levels started rising at a comparatively drastic 2.1 millimeters per year, and the trend has continued today.

The study marks a huge advancement in the science of measuring sea level changes because for the first time, scientists have recorded a precise and continuous record of sea level changes dating back over two millenia. This record, which the study based on salt marsh microfossil records from North Carolina’s coast, shows that sea level changes for the past millenium have correspended to global temperatures. When the world started warming up, sea levels rose. When it cooled, they stabilized.

I talked with Ben Horton, one of the study’s authors and an environmental scientist at the University of Pennsylvania, to put some of the science behind these findings into layman’s terms:

MJ: A chart related to your study compares the proxy reconstructions it used to sea-level observations and models of sea-level estimates. What exactly are proxy reconstructions, and why did your study use them?
BH: A proxy is the application of a biological, archeological, or any indicator of environmental variables. [For our proxy,] we used salt marsh records, focusing on the microfossils in them. If you want to look into the past of sea levels, you have to use proxies because reliable tide gauges based on observation only go back a hundred years or so. 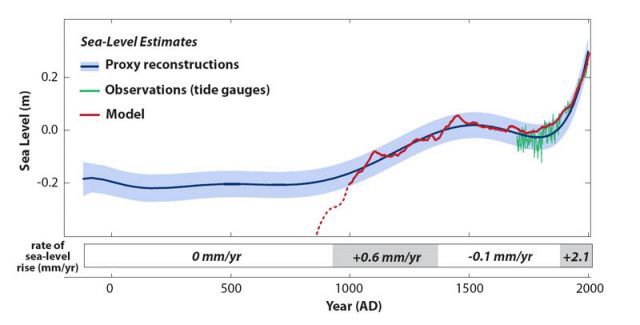 MJ: Why are the study’s findings such a big deal?
BH: We’ve produced an important body of data. Future predictions of sea level rise models can now be turned on their heads and compared to this data about what happened in the past. If they don’t align, then there’s something wrong with your model that you can investigate… maybe there’s a problem with your data set.

MJ: Based on these findings, what do you think will happen to sea levels in the future?
BH: We know in the future that temperatures are predicted to rise, so it doesn’t take a rocket scientist to know sea levels are going to go up.

MJ: And if sea levels continue to rise, how will it impact our world?
BH: If sea level rises, it has implications to coastlines, [such as] flooding and saltwater intrustion into freshwater. The more sea level rises, the greater the problems society and also natural ecosystems will face.