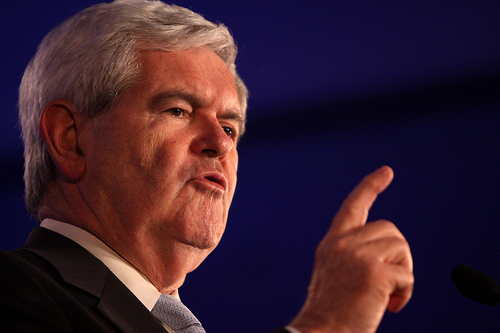 Things just got even worse for Newt Gingrich, whose presidential campaign has imploded in recent weeks with the bulk of his staff jumping ship. The latest blow to his campaign is the revelation that the Gingrichs had not one but two lines of credit at the luxury jewelry store Tiffany. As the Washington Post reports, Gingrich must file a personal financial disclosure form within a month of declaring his candidacy, and that form will show that Gingrich enjoyed a $500,000 to $1 million line of credit at Tiffany, which has been closed with a zero balance. Here’s more from the Post:

[Gingrich spokesman Joe] DeSantis added that all debts to Tiffany had been paid in full. He offered no details about when the second line of credit was taken out, what it was used for or when it was closed.

This revelation comes roughly a month after personal financial disclosure forms for Gingrich’s wife, Callista, showed that the family had carried a line of credit ranging between $250,000 and $500,000 at Tiffany’s during 2005 and 2006.

Gingrich’s campaign has struggled since its inception. After formally entering the race on May 12, he weathered widespread staff departures earlier this month amid allegations that the campaign was running low on cash even as the candidate insisted on taking chartered planes to and from events.

That jet-setting has left the Gingrich campaign more than $1 million in debt, with fundraising dollars coming in at a trickle. That probably explains the departure of top fundraising aides Mary Heitman and Jody Thomas last week, dealing yet another blow Gingrich’s flailing campaign. The question now is: How long can Newt keep his presidential bid afloat with only himself and his big ideas?