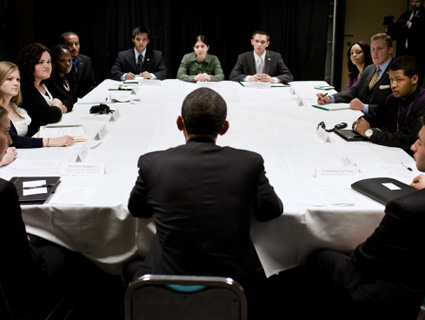 In his 2010 State of the Union address, President Obama called small business growth key to the economic recovery. “We should start where most new jobs do—in small businesses, companies that begin when an entrepreneur takes a chance on a dream, or a worker decides it’s time she became her own boss,” he said then.

Now the US Small Business Administration says that in fiscal year 2010 it doled out $98 billion in federal contract work to small businesses, just shy of its 23 percent of total federal contract funding goal (PDF).

Not so, counters the non-profit American Small Business League, which has hammered the SBA on this issue for years: It claims that 61 of the top 100 companies that received government small business contracts are actually big corporations, including subsidiaries of defense contractors Lockheed Martin and Rockwell Collins (PDF). In a statement, the group’s president Lloyd Chapman called the government numbers “misleading smoke and mirrors” and said small business awards were closer to five percent of total funds.

Federal investigations dating back to 2003 suggest that billions of dollars in small business contracts have landed in the hands of big firms. In the 2010 fiscal year, according to the ASBL, those included AT&T, General Electric, Hewlett-Packard, and John Deere, among many others. (Remember when Bechtel-Bettis got an $128 million “small business” contract for managing the Department of Energy’s Pittsburgh Naval Reactors Office?)

Last year, Sen. Mary Landrieu (D-LA), who heads the Committee on Small Business and Entrepreneurship, predicted that increasing legitimate small business contracts by a single percent would create more than 100,000 new jobs for the fiscal year. The ASBL used her prediction to make one of its own: It believes that halting the flow of small business contracts to big businesses would create nearly 2 million jobs.

“Ending this abuse would be a more effective economic stimulus than anything proposed by the Obama Administration to date,” Chapman said in the statement.

UPDATE: Part of the difference between the SBA’s calculation of the percentage of contracts going to small businesses and the ASBL’s calculation is the fact that the two groups are using different baselines. The ASBL says “the Obama Administration has dramatically inflated the percentage of contracts awarded to small businesses by under-reporting the actual federal acquisition budget,” and argues that “the actual federal acquisition budget for foreign, domestic, classified and unclassified projects is roughly $1 trillion.” The Obama Administration uses a number that is closer to $430 billion and is based on other agencies’ self-reported acquisition budgets, which the SBA checks for anomalies.