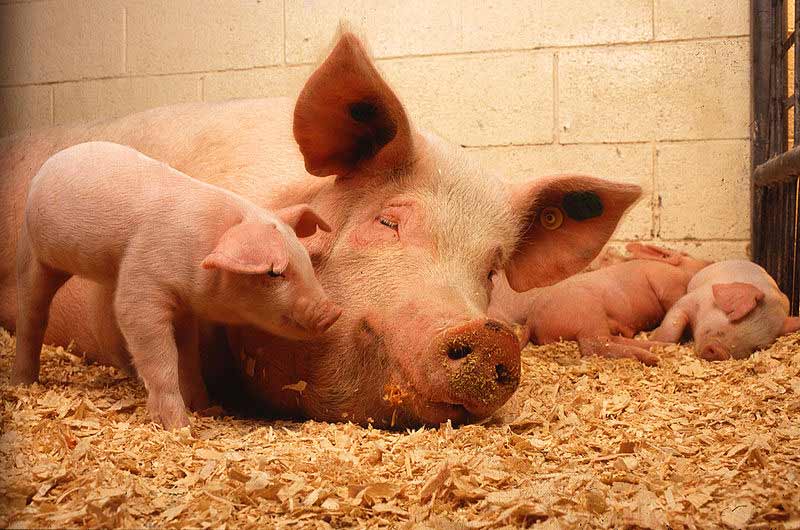 Last week, Mother Jones’ Hannah Levintova reported on breast milk-producing cows in Argentina. Now researchers in Japan believe human organ-growing pigs could prove biomedicine’s next big thing. A team at the University of Tokyo implanted a kind of adult stem cell from rats into the embryos of mice genetically bred to be unable to grow their own pancreas. Lo and behold, by the time the mice matured, they possessed fully-developed pancreases formed primarily from the transferred cells.

The researchers are confident that the same methods can be applied to pigs and humans, whose comparable scales and genomic similarities have long made porcine valves a leading option for heart disease sufferers. The techniques employed with the rats and mice, they believe, could yield an abundant new source of human donor organs. In that scenario, a patient’s stem cells would be injected into a pig embryo. Once developed over the course of a pig’s roughly 16-week gestation period, the organs could be transplanted back into the patient. As a bonus, using a patient’s own cells would likely help reduce the risk of rejection.

Although the research has yet to make a big splash among American scientists, Bill Murphy, associate director of the Stem Cell and Regenerative Medicine Center

at the University of Wisconsin, is optimistic about its implications. Until now, it’s been “difficult to envision creating certain organs outside the body,” says Murphy, “so creating these complex organs inside the body of a host has the potential to address that critical challenge.”

That said, Murphy cautions that the vision is a ways from becoming reality. There’s no guarantee that the techniques employed on rats and mice are transferrable to pigs and humans. In addition, the transplants could trigger immune responses if the organs contain remnants of animal tissue.

Even if the science does pan out, Murphy says it’s likely to be at least a decade before you can go claim your very own pig-bred heart. Until then, well, you can stick to thinking of our porcine friends merely as the delicious breakfast meat on the buffet table—by which point you might just need that new heart after all.