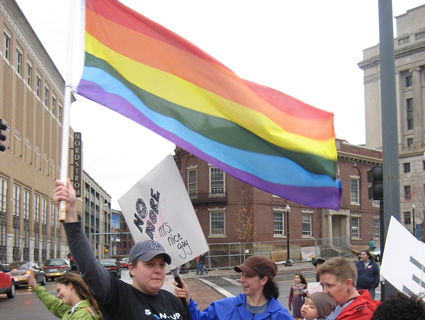 Before New York became the sixth state to legalize same-sex marriage less than a week ago, state senators there carefully crafted religious exemptions to satisfy Republicans who proved key to the bill’s final passage. Now, Rhode Island is engaged in a similar debate, only this time it’s same-sex marriage advocates who oppose a civil unions bill that they say provides too many exemptions. But the bill’s headed to the desk of Gov. Lincoln Chafee, who says he will sign it.

At issue is an amendment to the bill with language that says religious organizations “shall not be required” to conduct civil-union ceremonies or “treat as valid any civil union.” Gay rights groups fear that would lead hospitals with religious affiliations to deny LGBT people the ability to make health care decisions for their partners. And they believe that other organizations, like schools and cemeteries, might also get away with refusing services to gay couples on religious grounds.

Anti-gay groups claim that the exemptions don’t reach far enough. The National Organization for Marriage called the bill “nothing more than a Trojan Horse that will usher in same-sex marriage sooner rather than later” and said it contained the “weakest religious liberties protection language possible.”

At first glance, Rhode Island seems like a natural fit for same-sex marriage. The Legislature is overloaded with Democrats and boasts the country’s first openly gay House speaker, Gordon Fox. All but two of New England’s six states allow same-sex marriage (and Maine used to.) Still, Fox changed course earlier this year, abandoning a same-sex marriage bill because he didn’t think it had enough support. Gov. Chafee cited a large elderly population and the Catholic church’s influence as reasons why same-sex marriage has been a hard sell in his state.

For now, state leaders seem to be comfortable with a compromise. The civil unions bill passed in the House in May, despite the two-fronted opposition, and the Senate passed it just minutes ago. Led by Marriage Equality Rhode Island, the gay rights groups want Chafee to veto the bill. But Chafee told the Providence Journal that even though he opposes the religious exemption language, “sometimes you don’t get it all.”