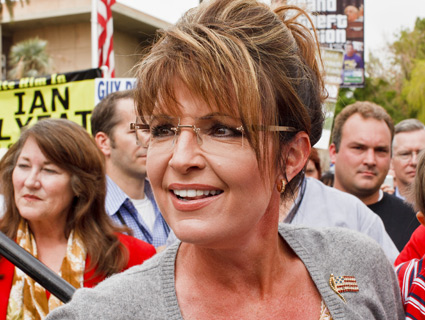 Today, at 9 a.m. local time in Juneau, the state of Alaska is scheduled to release 24,199 pages of emails Sarah Palin sent and received during her half-term as governor of the Last Frontier. State workers will distribute six-box sets and hand trucks (which must be returned) to representatives of a dozen or so media outfits, including Mother Jones. Immediately, a mad dash will be on, with journalists reviewing (and scanning) these thousands of emails, searching for illuminating or entertaining information regarding the GOP’s number-one political celebrity, who remains a possible 2012 presidential contender. (Shortly after the release, Mother Jones, msnbc.com, and ProPublica will post online a searchable archive of the emails.) This saga began with a request I made almost three years ago.

When John McCain chose Palin as his sidekick, reporters rushed to dig up what they could about the little-known chief executive of the faraway state. As part of that frenzy, I came across a local story about a citizen activist in Alaska named Andrée McLeod, who had used the state’s open-records law to request emails sent to and from two of Palin’s top aides over a period of several months in 2008. McLeod suspected that the pair had engaged in prohibited political activity during official business hours. The governor’s office handed over four large boxes of emails, portions of which McLeod used as the basis for filing an ethics complaint. But more intriguing than the documents released was the material withheld: 1,100 emails the state deemed exempt from release because they were covered by the “executive” or “deliberative process” privileges that protected communications between Palin and her aides about policy matters. The subject lines of several of the withheld emails—which were catalogued in a list given to McLeod—suggested that they were not policy-related. Several referred to one of Palin’s political foes, others to a well-known Alaskan journalist.

Though it appeared that Palin’s administration might have abused the exemptions to hide politically inconvenient emails, I thought it was worthwhile to shoot for the moon. On September 8, 2008—ten days after McCain tapped Palin as his running mate—I filed a request with the state for “all emails sent and received by” Palin during her entire tenure as governor.

This was the first comprehensive request for the Palin emails received by the state. In subsequent days, other media outlets submitted more-limited requests. The Associated Press and NBC News requested copies of emails sent to and from Todd Palin. Msnbc.com asked for emails between Sarah Palin and certain state employees. CNN requested emails to and from the McCain presidential campaign.

Palin’s use of a private account was arguably improper and perhaps a violation of state guidelines. Why should news organizations and citizens have to pay extra because the governor had decided to engage in state business on a private email account?

I wasn’t sure whether the state could process my request before the November election, when Americans would have to render judgment on the McCain-Palin ticket. That would would entail collecting and reviewing a lot of information. But the state’s initial response, outlined in a September 22 letter, was almost encouraging. The state noted that it would take eight hours of computer staff time to gather the emails and perform “security operational management,” whatever that meant. For all this, Mother Jones would have to pay a fee of $2,249.46. But there would be an additional cost for copying. The normal duplication fee, the state said, was 10 cents a page. But for this request the state had opted to use an outside vendor that charged 29 cents a page. And there was no way to tell at the start how many pages would be produced; certainly there would be thousands.

Without knowing what the final fee would be, Mother Jones decided to proceed, and the state revised the initial fee covering the search to $590.96. That seemed a like bargain. I sent in a check. We were on our way.

But soon, a big problem materialized. News reports revealed that Palin had used a private Yahoo email account to conduct state business. (This account was soon hacked.) I asked Palin’s office whether it would be collecting emails related to state business sent to and from this account. Linda Perez, the administrative director of the Alaska governor’s office, replied, “We are unable to access records from the nonstate email accounts as we are not the account owner or customer of the providers.”

Regarding this Yahoo account, the state, Perez reported, could only gather emails that Palin had sent to or received from the official email accounts of other state employees, including her aides. But doing so would require searching the accounts of dozens of other state employees at a cost of $960.31 per account. Perez noted that searching through the email of all state employees would result in an exorbitant fee. But, she added, there were 68 employees within the executive offices of the governor. This meant a limited search would cost about $65,000.

I protested. Palin’s use of a private account was arguably improper and perhaps a violation of state guidelines. Why should news organizations and citizens have to pay extra because the governor had decided to engage in state business on a private account? I requested that the fees associated with searching these 68 accounts be waived. Days later, the news emerged that Palin had used a second private account to communicate with a small circle of staff members—further complicating the effort to gather her emails.

Palin had in effect created a challenge for the state (especially its IT workers), and the state agreed to drop all search fees. Officials returned my check for $590.96, while noting that the request still would probably end up costing between $7,000 and $13,000 in copying fees. (Mother Jones, msnbc.com, and ProPublica agreed to cover these costs, share the documents, and jointly develop the online archive.) But now the major issue was time. Recovering the emails from Palin’s various official and nonofficial accounts and then reviewing those messages would take a while. “I can’t even begin to estimate,” Perez told me, with a sigh, in October 2008.

At this point, it was obvious there would be no Palin emails released before the election. Though the state could have gone ahead and collected and reviewed emails from her state account—which presumably would have taken less time—it insisted on making those official emails a part of the more comprehensive and time-consuming project.

The long wait began. As the governor’s office began processing the request, every few months it asked the state attorney general for an deadline extension. And the AG (always a Republican) said yes.

In December 2008, the state—which had lumped together most of the various media requests—told us that it had collected about 25,700 relevant messages. (It was compiling emails from the official accounts of 51 state employees, not 68.) But the state noted that it would take 33 days merely to print them out—and then the lawyers would have to start reviewing the documents to determine if any material should be withheld or redacted. The state declined to say how long the legal review would go on. At the end of January 2009, the senior assistant attorney general in charge of the review noted in a memo, “Unfortunately, we have made little progress.” He reported that his department had been unable to “batch-print the email records in the format provided” and that each email had to be opened individually and converted to a PDF file.

Throughout the months, the state reported various glitches. For instance, at one point its techies realized that the format for state employees’ email addresses had changed during the period in question from @[department].state.ak.us to @alaska.gov. Consequently, IT staffers had to collect data from twice as many accounts as initially anticipated.

The senior assistant attorney general in charge of the review noted in a memo, “Unfortunately, we have made little progress.”

In February 2009, acting attorney general Richard Svobodny declared that he had designated the ongoing email review “a very high priority” for the state’s Department of Law—as he granted another extension. The following June, he noted that the department had devoted “over 4,000 hours to providing legal review and advice on public records at a cost to the state of $450,000,” and he granted another extension.

When Palin resigned as governor in July 2009, the governor’s office asked the journalists seeking her emails if we were “still interested in the requested records.” Yes, we replied. Two weeks later, the state’s Department of Law wrote a memo reporting that it had a team of six attorneys and four paralegals and associate attorneys on the case. It claimed it had “continued to make significant progress.” Still, more extensions came and went. (In June 2010, the state did release to msnbc.com and NBC News nearly 3,000 pages of emails Todd Palin had exchanged with state officials. )

This past December, the state reported that it had identified 26,553 pages of emails, and the lawyers had reviewed less than one-third of this trove. More time was needed. But Alaska attorney general David Sullivan demanded that the governor’s office submit a work plan that would state when the request would be finished, and a target date was set: May 31, 2011.

Now, another six months later, the governor’s office has missed that date, but by only 10 days. Not bad, considering. The final fee ended up being a reasonable $725.00 for copying.

But what’s coming? Or, more important, what’s not? The state has informed us that it is withholding 2,353 pages. And the released documents will contain redactions. There may be no way to tell if the suppressed material was excised legitimately. (The state, as I noted above, doesn’t have a sterling record on this front.) The lawyers who reviewed the emails and recommended deletions worked for Palin or her successor Gov. Sean Parnell, who served as Palin’s lieutenant governor. Citizens might be excused for wondering if politics (or Palin protection) was a concern among the redacters. The lawyers suggested material to block; the governor’s office rendered the final decision.

Still, it is hard to envision a release of so many pages that won’t contain valuable nuggets for those who want to better understand Palin, who has been all over the news of late. For months, as other leading Republicans have been stating their intentions regarding the presidential race, Palin, who has declined to indicate whether she might enter the contest, seemed somewhat eclipsed within the political-media firmament. But she recently took steps to elevate her profile, including a stunt-like family bus tour of historic sites imbued with patriotic meaning. She quickly returned to the headlines, dominating the political news—even crowding out announced candidates. A Palin presidential reality show, at the moment, appears a greater possibility. And opposition researchers in the various GOP presidential campaigns are, no doubt, eager to peruse these records.

So perhaps the Palin emails are arriving at an appropriate time. The request I placed during the last presidential campaign might end up affecting the current one.