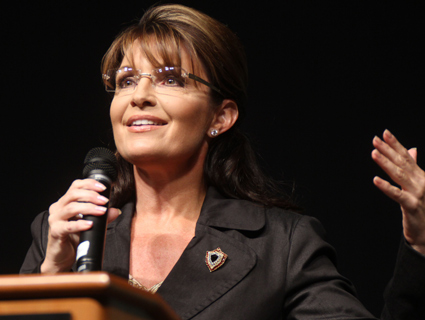 Coming real soon: Sarah Palin’s emails. Or at least some of them. And you’ll get to read them in a searchable archive.

During the 2008 presidential campaign, I filed a request under Alaska’s open records law, for all—yes, all—of Palin’s gubernatorial emails. Other journalists and citizen activists later did the same. And after many delays—see here and here—the state is finally preparing to release those emails, probably within the next week or so.

But not all of the emails from Palin’s half-term as governor will be made public. In a letter that was recently sent to me and other requesters, the state says it will be disclosing 24,199 pages of records. But it notes, “We withheld and redacted some records that are responsive to your request.” Previously the state said that it had located and/or recovered 26,552 pages of emails. This suggests that state of Alaska is withholding 2,353 pages. And there’s no telling how heavily the remainder of the emails will be redacted.

The state has a history of making liberal use of exemptions to hold back gubernatorial records. Months before Palin was tapped by Sen. John McCain (R-Ariz.), the GOP presidential nominee, to be his running mate in 2008, her office declined to release 1,100 emails from two Palin aides in response to an open records request filed by citizen activist Andrée McLeod. The state claimed that these emails were exempt because they concerned confidential policy matters. Yet a list of the subject headings of the withheld emails referred to non-policy and political matters, suggesting that the state had taken a decidedly expansive interpretation of the available exemptions.

When the records are released, Mother Jones will partner up with msnbc.com and ProPublica to create an online archive of the Palin emails. This database will be searchable and fully open to the public. The plan is for it to be up and running about a week after the papers are handed over to us. By that point, several media outfits—including Mother Jones—will have combed through the records. Yet any reader who wants to sit in a cozy chair with an iPad or laptop and spend hours upon hours absorbing Palin’s e-correspondence—looking for missed nuggets or merely seeking further insight into Palin’s governorship—will be able to do so, courtesy of those of us who spent the past two-and-a-half years pushing these records into the open. Here comes some real summer reading.