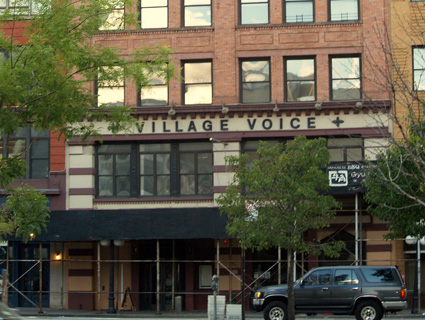 In New York, unionized staffers at the Village Voice say they will strike if management doesn’t address their demands for better health and retirement plans by tomorrow, when their current contract expires.

The Voice—the nation’s oldest and largest alt-weekly newspaper—is among a handful of media outlets left with union representation. The paper renegotiates its contract with the United Auto Workers (which also reps Mother Jones) every three years, but while staffers have a history of threatening strikes they have never actually gone on one.

Since the last negotiation, a joint press release from the UAW and Pulitzer-finalist Voice reporter Graham Rayman says, “staff has been cut by an estimated 60%, and average annual salaries have markedly diminished.” The statement is published on TheRealVoice.org, where staffers say they plan to continue writing in the event of a strike.

Of course, staff and pay cuts are pretty standard fare in the news biz these days (Washington Post media blogger Erik Wemple takes the union to task over this). But Voice management has forced out a notable host of acclaimed journalists in recent years. Since its acquisition by Phoenix-based New Times Media (now Village Voice Media) in 2006, the paper’s lost scribes have included music critic Robert Christgau, reporter James Ridgeway (who’s now with Mother Jones), and political reporters Wayne Barrett and Tom Robbins.*

Over at FishbowlLA, former LA Weekly reporter Steven Mikulan analyzes the situation. Mikulan has some experience in these matters, as he used to work for Village Voice Media’s unionized publication LA Weekly, until it let him go in 2009. From Mikulan:

Neither the LA Weekly nor the Voice‘s union locals have the right to strike—until after their contracts expire and there’s no sign of a new collective bargaining agreement. (Likewise, management can’t lock out the union—until the contract expires, etc.) That’s the way most contracts are—to walk out while a contract’s in force is to engage in a wildcat strike…

It’s not surprising that medical benefits are at the heart of the holdup. In 2008 the Voice’s union dodged the bullet of having to contribute to its health care plans, probably because the ownership changeover had just happened and the new, highly unpopular owners had a lot more to worry about than getting bogged down in contract talks.

“Nothing that’s happened so far is any different than in previous years, and I expect that on or before June 30 we will end up with a new contract that is approved by both sides,” Voice editor-in-chief Tony Ortega told Gothamist.

But the Village Voice has undergone a lot of changes in recent years (to say nothing of its drift away from its Norman Mailer/Greenwich Village origins), not all for the better, and it will be interesting to see how the paper’s next chapter unfolds.

*Full disclosure: I interned with Barrett last summer before he left the Voice.