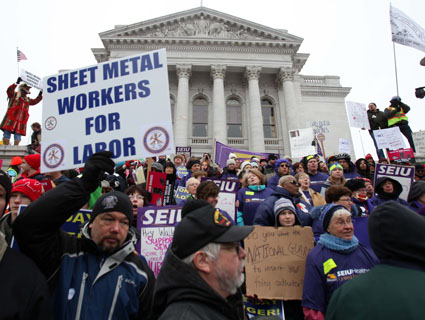 Reversing an earlier decision by a county judge, the Wisconsin Supreme Court upheld Republican Governor Scott Walker’s anti-union “budget repair” bill, which slashes collective bargaining rights for most public-sector unions. The unusually quick decision was 4 to 3; conservative justice David Prosser, who narrowly won reelection this spring after a series of controversial recounts, was among those who believed that Republican lawmakers had not violated the state’s open meetings act and supported reinstating Walker’s bill.

In their majority opinion, the four justices wrote:

Choices about what laws represent wise public policy for the state of Wisconsin are not within the constitutional purview of the courts. The court’s task in the action for original jurisdiction that we have granted is limited to determining whether the Legislature employed a constitutionally violative process in the enactment of the act. We conclude that the Legislature did not violate the Wisconsin Constitution by the process it used.

That, of course, was a rebuke of Dane County Judge Maryann Sumi, who ruled last month that GOP lawmakers failed to give proper notice of a crucial meeting in which they voted to approve Walker’s anti-union bill. In a dissenting opinion, State chief justice Shirley Abrahamson, however, ripped the four justices who supported upholding Walker’s bill for having “reached a predetermined conclusion not based on the facts and the law, which undermines the majority’s ultimate decision.” The four justices, she went on, “make their own findings of fact, mischaracterize the parties’ arguments, misinterpret statutes, minimize (if not eliminate) Wisconsin constitutional guarantees, and misstate case law, appearing to silently overrule case law dating back to at least 1891.”

Walker’s bill will officially become law as soon as Secretary of State Doug La Follette publishes the bill, which has been caught in legal limbo for months as the court system debated whether lawmakers rushed the bill through the legislature without proper notice to the public.

State Republicans hailed the court’s decision. In a statement, Scott Walker said, “The Supreme Court’s ruling provides our state the opportunity to move forward together and focus on getting Wisconsin working again.” State Assembly speaker Scott Fitzgerald, a Republican, told the Milwaukee Journal Sentinel, “We upheld the constitution all the way through the passage of Act 10. We feel great about the decision.”

Democrats reacted angrily to the ruling. “The majority of the Supreme Court is essentially saying that the legislature is above the law,” said state Rep. Peter Barca, the top Democrat in the Wisconsin Assembly, the legislature’s lower chamber. “It’s now clear that unless the constitution is amended the legislature is free to ignore any laws on the books.” Graeme Zielinski, a spokesman for the Democratic Party of Wisconsin, said, “This will add fire to the movement to recall the Republican senators who stand by the runaway Scott Walker agenda…The decision itself was no surprise, given that this is a Supreme Court bought and paid for by the same corporate special interests that purchased elections for this governor and this Legislature.” He added, “The only surprise was that they did not install Scott Walker governor-for-life.”