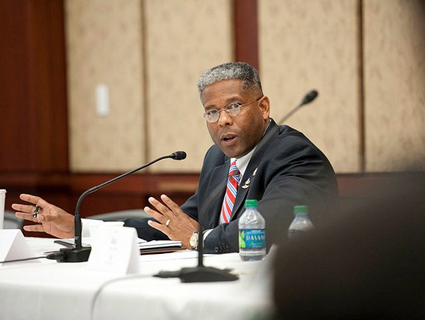 On Monday afternoon, as markets fretted over the possibility of the United States government running out of money to pay its creditors, Rep. Allen West (R-Fla.) held a briefing on a crisis that could bring the nation to its knees. “This is about the protection of each and every American citizen who ever resides within our borders,” West told the audience in the basement of Rayburn House Office Building.

West wasn’t there to talk about Congress’ apparent inability to raise the debt ceiling, though. He was there to introduce Peter Leitner of Citizens for National Security, an organization based in Boca Raton, Florida, that is dedicated to raising awareness of the threat of Islamic extremism in American communities. The group, which previously tried to ferret out perceived Islamic bias in Florida public-school textbooks, had been invited by West to present the findings of its latest report: “Homegrown Jihad in the USA: Muslim Brotherhood’s Deliberate, Premediated Plan Now Reaching Maturity.” CFNS claims to have a list of 6,000 members of the Muslim Brotherhood who are living in America and determined to “penetrate the United States and eventually erode its institutions, policies, and sense of self through the creation of a multifaceted Fifth Column movement within our borders.”

That’s a serious charge, and in a 45-minute presentation, Leitner backed it up with a series of charts that linked various Muslim organizations, from Hezbollah to the Muslim Students Association, in one giant, overarching conspiracy bent on “destroying the United States as it currently stands.”

Two days after it was discovered that Anders Breivik, the Oslo gunman, was an admirer of America’s leading anti-Islam activists—including CFNS advisory committee member Daniel Pipes—the American anti-Sharia movement showed no sign of mellowing. Leitner dismissed Breivik (“a bizarre Norwegian farmer”) as a nutcase, but, like a number of prominent conservative commentators, allowed that he might nonetheless have been on to something. “He may be correct that there’s a certain kind of a threat that we face, depending on his view,” Leitner said in response to a challenge from a Muslim audience member, “but he fits the lines of a classic lunatic.”

The Brotherhood’s plot, as CFNS explains it, consists of four coordinated thrusts. The first comes from the Muslim Students Association, which since its inception in 1962 has pushed its ultrastealth jihad through charities and professional organizations like the Association of Muslim Scientists and Engineers and the Islamic Medical Association. The second push comes from Pakistan’s Jamaat e-Islami. The third comes from Hamas, and, in turn, the Council on American Islamic Relations, the nation’s largest Muslim civil rights organization. And the fourth thrust is a cumulative effort, in which all three of those groups whip the American Muslim community into a fervor over a trumped-up persecution narrative. The Brotherhood’s membership, was not, Leitner took pains to note, drawn simply from vulnerable immigrant groups like the Somalis of east Minneapolis. “They’re drawn from very smart classes: teachers and lawyers and medical professionals,” he said. “These are not simple people.”

It was a tangled web—Leitner conceded that his diagrams are “kind of like looking at a plate of spaghetii”—but that was precisely the point: According to Leitner, the Muslim Brotherhood made the plot so vast and multifaceted as part of a campaign of “intentional denial and deception through intentional complexity.” In other words, the conspirators made their conspiracy so big and so omnipresent that the public lost its ability to see the forest for the treason. But don’t call Leitner a black-helicopter type: “You don’t have to be a conspiracy theorist to understand there really are conspiracies in the world,” he said. 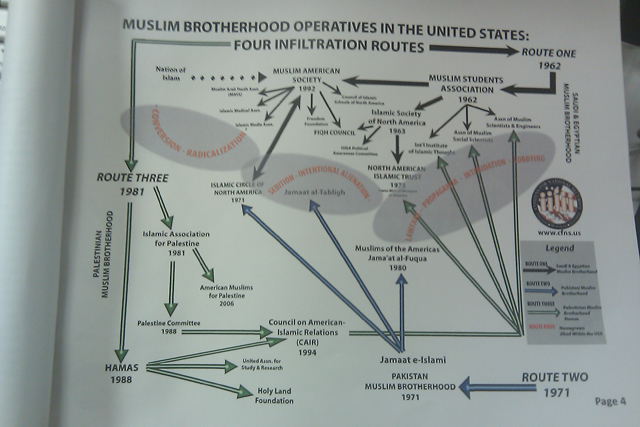 Courtesy of Citizens for National SecurityCitizens for National Security’s report was preceeded by a big announcement that the group would be releasing the names of 6,000 active members of the Muslim Brotherhood. But when the big day came, the group stated that the names would actually be kept under wraps and only released to select “responsible parties.” In a response to a query from Wired‘s Spencer Ackerman, Leitner conceded that the people on his list had not necessarily been charged with any crimes. Instead, they were just people who are involved with organizations he had connected to the Muslim Brotherhood—like the Muslim Students Association.

Islam isn’t the enemy, Leitner explained. The Muslim Brotherhood is the enemy. But if that’s really the case, the anti-Muslim-Brotherhood crowd forgot to tell their chief congressional benefactor. Although West has said in interviews he has no problems with individual Muslims (some of his best friends…), he has called the religion itself a “vile and very vicious enemy.” At a campaign event in 2010, he took on “Coexist” bumper stickers that advocate religious tolerance, arguing that they’re a sign of timidity in the face of Islam: “We are afraid to stand up and confront that which is the antithesis, anathema of who we are.” He continued:

We already have a Fifth Column that is already infiltrating into our colleges, into our universities, into our high schools, into our religious aspect, our cultural aspect, our financial, our political systems in this country. And that enemy represents something called Islam. And Islam is a totalitarian theocratic political ideology; it is not a religion. It has not been a religion since 622 A.D., and we need to have individuals that stand up and say that.

Folks like West and the CFNS want to have it both ways. They cast as wide a net as possible and call for the Muslim Students Association to be classified as a terrorist group. But then they tell the handful of MSA members who attended Monday’s presentation that no one is calling them terrorists. Islam isn’t the enemy—except for when it is. Large groups aren’t responsible for the actions of a few fringe members—except for when they are.

If the Muslim Brotherhood seriously intends to implement Shariah law over the United States, the group faces long odds. Ninety-eight percent of Americans are not Muslim. Of the remaining sliver, the overwhelming majority seem pretty satisfied with our current system of constitutionally protected religious freedom. For a conspiracy that’s been operative since 1962, things sure are moving slowly. But there was one gaping omission from Leitner’s report that might have redeemed the whole thing.

Frank Gaffney of the Center for Security Policy* alleged last summer that Americans for Tax Reform founder Grove Norquist was secretly an agent of the Muslim Brotherhood. And it’s Norquist, along with a host of influential conservative leaders like RedState’s Erick Erickson, who are leading the charge against any sort of reasonable deal on the debt ceiling—sending the federal government careening toward a default, which would crush the economy and cause tens of millions of Americans to lose whatever remaining faith they had in the nation’s core political institutions. And then, boom—Shariah. It’s almost too perfect.

*Correction: An earlier version of this story misidentified the name of Gaffney’s organization. We regret the error.