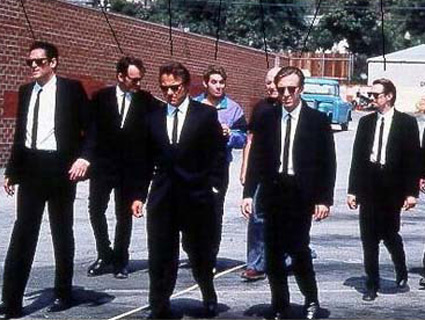 It seems as if Quentin Tarantino has scripted Washington’s debt ceiling showdown. Most of his movies include an imaginative version of the ever-classic Mexican standoff. (See Reservoir Dogs.) And the current drama in the nation’s capital is playing out like a Tarantino flick.

The House, controlled by Republicans who in turn are controlled by tea party ideologues, is aiming a metaphorical gun at the president. The House Republicans are refusing to raise the debt ceiling (which could trigger a major economic setback) unless Obama agrees to trillions of dollars in government spending cuts without any accompanying tax increases (and also accepts a balanced-budget constitutional amendment that would force draconian cuts). Meanwhile, the Senate Republicans are pointing a gun at the House Republicans, with GOP leader Mitch McConnell (R-Ky.) promoting a plan to let Obama raise the debt ceiling on his own, and with some Senate GOPers showing support for the so-called Gang of Six plan that would include both significant spending cuts and revenue boosts. That is, the Senate Republicans are willing to undercut the ideological purity of the House tea partiers and cast their lower-chamber comrades as extremists. And then there’s the president, who has been pushed by Republicans in both chambers to adopt their narrative (it’s the deficit, stupid!). He has his figurative weapons sighted on GOPers in each body, for he’s been slowly persuading the public that the Republicans have been acting unreasonably, threatening default and insisting on no tax increases in any grand deficit-reduction package. Oh, yes, and the House Democrats are in the wings, ready to pounce should Obama and the non-tea-party Republicans hammer out an accord that includes Medicare and Social Security cuts that are not to their liking.

This default showdown is no simple D-versus-R tussle. And this complicated mess has to be untangled by August 2. Otherwise, the US economy and the fragile recovery could be at risk, with millions of Americans facing the consequences.

Obama, in conventional terms, might have the advantage at this stage. A recent rash of polls have each shown that the public now supports the president on the basics: The debt ceiling should be lifted, and a deficit package should include both spending cuts and tax increases. These surveys also indicate that the public, which is in a dark mood, trusts Obama more than the Republicans to handle these thorny matters. Which means that Obama (whose approval ratings are low, but not nearly as low as the congressional Republicans) and his aides are receiving positive reinforcement for what seems to have been the White Houser strategy for the past few months: Accept the GOP terms of debate that the debt is the priority and attempt to out-maneuver the Republicans by behaving as the mature and reasonable compromiser-in-chief.

But, as with last December’s tax-cut deal, Obama has had to give up much to gain. Back then, he accepted the Bush tax cuts for the wealthy and a very generous estate tax cut in order to obtain 13 months of unemployment insurance, a payroll-tax holiday, and an extension of several refundable tax credits that benefit low- and middle-income Americans. He essentially achieved a second stimulus in that deal. The provisions he cared about were several times the size of the bennies for the rich. These policies could be expected to have a positive impact on the unemployment rate—and, thus, bolster Obama’s own reelection prospects.

There’s no obvious ending to the debt ceiling face-off. Reservoir Dogs might turn into Armageddon.

This time around, Obama may be outplaying the Republicans. But should he prevail—either by winning a stand-alone boost in the debt ceiling or by actually crafting a large deficit-reduction package that includes tax revenues—he will end up with a mixed bag of spoils. Certainly, Obama will be able to claim, once again, that he’s the adult in the room who can force Washington’s bickering partisans to do their jobs. That plays well with the independent voters who helped him win in 2008 and who have soured on him since. Yet a deficit-reduction package won’t address the current jobs crisis—unless it includes significant stimulative sweeteners. A debt deal could even make the employment situation worse (depending on the particulars). And for voters who really, really care about the deficit—to some it is an issue that signals whether the federal government knows what it’s doing regarding the economy—unemployment has a more direct impact on their lives and, most likely, on their voting behavior.

So victory on the deficit front may not yield on-the-ground changes that will lower unemployment and establish a better political environment for Obama in 2012. Moreover, such a win could further solidify the current GOP-made story line: The debt and deficits are the number one issue. That could limit Obama’s ability to propose any new and extensive measures to address the jobs emergency, since such proposals cost money. Given the recent anemic job growth, further government intervention could be required to bring unemployment below 9 percent—which seems a precondition to Obama’s reelection. By scoring on the GOP playing field, Obama could end up enhancing the opposition party’s economic message.

Then there’s this: the Democratic base. Polls show that on the macro level liberals still love Obama. But progressive activists and influentials won’t be happy with any plan that cuts Medicare and Social Security. House Democrats are poised to go ballistic should Obama reach an agreement with Republicans to squeeze the entitlement programs. Ever since the House Republicans passed Wisconsin Rep. Paul Ryan’s budget that would end the Medicare guarantee, House Democrats have viewed attacking the GOP on Medicare as their path back to power. They fear that if Obama signs off on a package that reduces Medicare benefits, that will blur the picture and neutralize their major piece of ammo. Sure, they could assert that Republicans voted to eliminate Medicare-as-we-know-it and Obama merely squeezed cost savings out of the program. But they know the under-fire Republicans will eagerly claim Obama’s Medicare reform as political cover.

It may well be that for Obama the best political outcome is no deal—with some mechanism that permits the debt ceiling to be raised. The polls suggest he would be in the position to win the inevitable blame game against the Republicans (both the tea party Rs and the non-tea-party Rs). He would get points from independent voters for triangulating without the liabilities of actual triangulation. He would sidestep a clash within his own party. He might even be able to walk out of the warehouse and leave the Senate Republicans and House Republicans behind, with their pistols still trained on each other. Still, he would be burdened by all the we-must-address-the-deficit rhetoric he has put forward in recent weeks—and have to contend with the expectations for debt action that he has raised.

There’s no obvious ending to the debt ceiling face-off. Reservoir Dogs might turn into Armageddon. And there’s no telling if Obama can win this three- or four-way duel in a manner that yields policy outcomes that address joblessness—the true economic priority—and that allows him to pivot toward his own agenda and press forcefully for needed investments in programs that lead to jobs growth. Yet if he can pull off that sort of victory and change the direction of Washington’s political war, perhaps the movie reference of choice will be Inglourious Basterds.