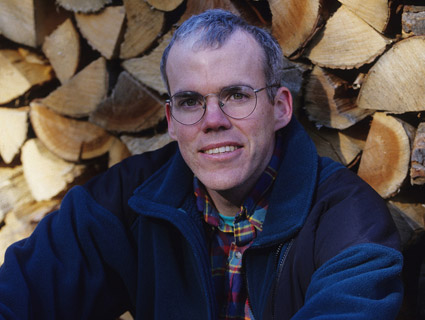 When we talk about global warming, much of the debate centers on separating facts from fluff, and environmental activist and Mother Jones contributor Bill McKibben wants to set the record straight. The Global Warming Reader, a book edited by McKibben and out this month from OR Books, pulls together seminal texts of the climate change debate with the goal of creating a complete picture of what we know about global warming. Selections range from a 19th-century treatise to images from Al Gore’s An Inconvenient Truth, and include a few unexpected gems like Senate floor statements from climate change denier James Inhofe (R-Okla.).

I spoke to McKibben about his history with climate change literature, his ongoing battle against ExxonMobil, and, in the face of dismal environmental realities, how he avoids the temptation to curl up in a little ball on the floor.

Mother Jones: Why’d you put this book together?

Bill McKibben: My goal was to have as many of the primary sources as I could made available for people to look at and understand. Climate change is probably the most important thing that’s ever happened, and yet people’s understanding of it and its history remains a little fuzzy. I thought it would be useful to collect these things in one place. I was especially eager to get some of the original basic science in there, partly because some of these [scientists] are real heroes.

MJ: When the general public engages in this discussion about climate change, are there still some basic factual holes that need to be filled?

BM: I do think that there are holes. I think one of the most important ones is people’s sense that this is something that’s going to happen very slowly and it’s a long ways in the future. That’s the reason I wanted to get in some of the most recent science and analysis demonstrating that we’re already well into the globally warmed world, and further in all the time. James Hansen’s paper about the 350 parts per million [of atmospheric carbon dioxide] as the cutoff for serious climate change is probably the most important scientific paper of the millennia to date, and it deserves to be widely, widely read. It’s the thing that launched our 350.org movement, which is now this very widespread, global, grassroots thing—and it flowed straight from that paper.

Books help. But I no longer think, if I ever did, that they’re enough by themselves. They have to be accompanied by attempts to build political will.

MJ: One thing I noticed with this book is that while you have very hard-science papers like that one, you also include more journalistic essays and photography and other genres. What were you trying to achieve with that kind of diversity?

BM: These are all parts of the different ways that we’re coming to understand the science. I think I ended the book with one of John Vidal’s pieces from the Guardian, about the effect [of global warming] on individual poor peasant farmers around the world, because that’s a kind of truth that science has a hard time getting at, but that some journalists have begun to do a really remarkable job explaining. The other thing that one needs to understand, besides the science, is the politics, because the biggest question about climate change, really, is why have we done so little to stop it? And the understanding of that requires an understanding of politics, so that’s the other big piece of what’s in there. People can get a sense of some of the high points, like Kyoto, and some of the low points, like James Inhofe’s congressional hearings on this subject.

MJ: So when you were picking these different works, what was your process like?

BM: Well, I already know a lot of this literature. I wrote the first book about climate change for a general audience, and at the time that I wrote it, most of the science that there was fit on top of my desk, you know? Now you could fill an airplane hangar with that science, though the basic conclusions remain alarmingly the same. So I’ve had a good sense of the contours of this debate since the beginning, both past and present. I just tried to think about some of the things that informed me the most over the years.

MJ: Did you learn anything from the process of putting this book together?

BM: I just was reminded once again of the basic simplicity of the problem that we’re dealing with. I mean, Svante Arrhenius figured it out in the 1890s, and his back-of-the-envelope calculations are remarkably close to what supercomputers yield at the moment. There’s no huge mystery. If you dig up huge amounts of carbon, huge amounts of ancient biology, hundreds of millions of year’s worth of ancient biology, and flush it into the atmosphere in a matter of decades, then it stands to reason that we’re going to have enormous effects, and now we can see those effects all around us. So I was reminded again of how, in a sense, straightforward a test this is for human beings. Can we avoid the temptation that is cheap fossil fuel, and keep things cool on this planet for a long time into the future?

MJ: One essay in the book is from you, an excerpt from your 1989 book End of Nature. You write that “There’s no such thing as nature anymore—that other world that isn’t business and art and breakfast is now not another world, and there is nothing except us alone.” Since you wrote that, have things changed, or do you still feel that way?

BM: Well, the kind of philosophical point I was trying to make, that it’s impossible anymore to posit a completely wild place on this planet, a place untouched by human beings, is, I’m afraid, truer now than it ever was. If there’s horrible flooding in Pakistan or a horrible heat wave in Texas, we’re no longer able to call it an act of God, or a natural disaster, or something like that, the way we could have through all of human history until 35 or 40 years ago.

MJ: In the book’s introduction, you write that “this anthology is an attempt to deal with the paradox that, though everyone (scientists, the insurance industry) we depend on to analyze risk tells us we are facing the gravest crisis in human history, our political system here and around the world is doing nothing.” I know this is a huge question, but why or how do you think that paradox came to be? What needs to happen for it to be corrected?

BM: I think it exists really for two huge reasons. One is that we’re all very used to the fossil fuel world, and so change is difficult. But change would not be impossible if we didn’t also have the influence of the fossil fuel industry, the most profitable and powerful the world has ever seen, who uses those profits and power to block any effective change that might begin to address this problem. The only way we’re going to do anything about that is to build a movement large enough to make up in numbers what we lack in cash, and try to counterbalance the enormous power of the fossil fuel industry. We’re not powerful enough yet to counterbalance ExxonMobil, but we’re getting a little closer every day.

MJ: Do you think that if you’re able to give people access to the most basic science, and some of these seminal texts, that that will help?

BM: Books help. I’m an author, and I’m a writer by nature, so I have to believe that books help. But I no longer think, if I ever did, that they’re enough by themselves. They have to be accompanied by attempts to build political will.

MJ: But you might hope that when people are presented with these facts, the facts themselves will become a call to action?

BM: I do think that’s true, and I think that anyone who takes the time to understand at any kind of serious level what’s going on with climate change, is very, very likely to become an activist around this issue. It is the biggest crisis that human beings have ever faced, and once people figure that out, then those who worry about the future of the planet—and that’s most people—want to go to work to do something about it.

MJ: On the other hand, all of this stuff we’re talking about here is pretty grim.

MJ: Well, how do you stay hopeful, or at least engaged? How do you keep people from just curling up into the fetal position?

BM: You know what, at some level I’ve given up trying to figure out whether I’m pessimistic or optimistic. I get up in the morning and do what I can, as much as I can, to try and change the odds of this wager that we’ve undertaken. What keeps me hopeful is seeing the tremendous response of people all over the world. We’ve organized 350.org in every country except North Korea. The thing that makes me bleak sometimes is just how quickly the science grows darker. We haven’t caught any breaks in the last 20 years. Everything that we’ve worried about has come in on the upper end of the projected range or off the charts altogether, whether it’s the melt of the arctic, or acidification of oceans, or the increase in drought and flood. So we’re clearly not going to stop global warming at this point. We’ve already raised the temperature of the planet one degree. We’ve got another degree in the pipeline from carbon we’ve already emitted. What we’re talking about now is whether we’re going to have a difficult, difficult century, or an impossible one. And we may still have enough room to maneuver to affect the outcome of that question.