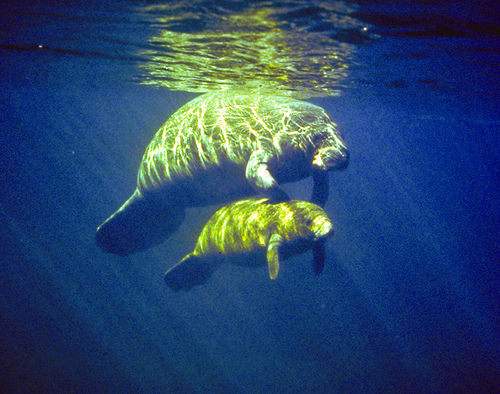 My friend Craig Pittman of the St. Petersburg Times, a manatee reporter extraordinaire, writes today about how the endangered species has joined the list of tea-party targets, along with taxes, high-speed rail, and socialized medicine. From the story:

A Citrus County tea party group has announced that it’s fighting new restrictions on boating and other human activities in Kings Bay that have been proposed by the U.S. Fish and Wildlife Service.

“We cannot elevate nature above people,” explained Edna Mattos, 63, leader of the Citrus County Tea Party Patriots, in an interview. “That’s against the Bible and the Bill of Rights.”

Areas of Kings Bay, which is in Citrus County, have been designated as a federal wildlife refuge since 1980. Jacques Cousteau’s 1972 documentary Forgotten Mermaids featured the manatees of Kings Bay, and it’s one of the only places where humans can actually swim with the giant mammals. As Pittman notes, the number of manatees in the bay has increased from 100 when the protections were put in place to more than 550 today. They are a major tourist draw to the area, but there has been an uptick in manatee deaths from boating accidents in the past ten years.

The US Fish and Wildlife Service expanded the refuge to include all of the bay last month, citing a need to protect the animals:

“The number of manatees using Kings Bay throughout the year has simply outgrown the capacity of existing protected areas,” said Dave Hankla, the Service’s North Florida Ecological Services Office supervisor, adding, “and human use of the bay has increased beyond the impacts originally considered when the existing protections were created.”

But the local tea-partiers see a broader, more sinister effort at play:

“We believe that (federal regulators’) aim is to control the fish and wildlife, in addition to the use of the land that surrounds this area, and the people that live here and visit. … As most of us know, this all ties in to the United Nations’ Agenda 21 and Sustainability.”

Ah, that! Our own Stephanie Mencimer has covered the UN-related conspiracy theories that a number of tea partiers and Glenn Beck fans believe underlie all sustainability-related initiatives. The Citrus County group’s website warns that that Agenda 21 is “designed to make humans into livestock.” Surely a one-world government run by manatees must be part of the agenda, too.