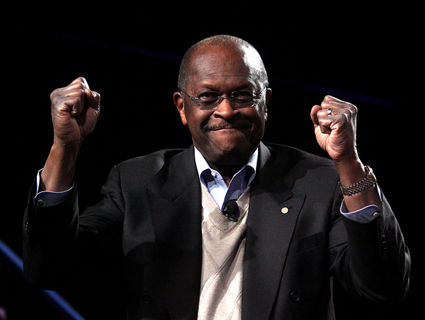 We’ve pilloried GOP presidential candidate Herman Cain in these parts for his insistance that Islam is incompatible with American values, his promise not to appoint any Muslims to his administration, and his belief that communities have the right to block religious groups (or at least Muslims) from building houses of worship. Cain, perhaps realizing that such bigotry has derailed a presidential campaign that really should have been focusing on health care reform instead, met with Muslim leaders in Virginia on Wednesday. Following the meeting, he released a statement declaring himself “humble and contrite,” and apologizing for potentially offending Muslim Americans.

Here is his statement, in full:

I would like to thank Imam Mohamed Magid and the ADAMS Center for extending their hospitality to me this afternoon. We enjoyed heartfelt fellowship and thoughtful dialogue about how patriotic Americans of all faiths can work together to restore the American Dream.

While I stand by my opposition to the interference of shariah law into the American legal system, I remain humble and contrite for any statements I have made that might have caused offense to Muslim Americans and their friends. I am truly sorry for any comments that may have betrayed my commitment to the U.S. Constitution and the freedom of religion guaranteed by it. Muslims, like all Americans, have the right to practice their faith freely and peacefully.

As I expected, we discovered we have much more in common in our values and virtues. In my own life as a black youth growing up in the segregated South, I understand their frustration with stereotypes. Those in attendance, like most Muslim Americans, are peaceful Muslims and patriotic Americans whose good will is often drowned out by the reprehensible actions of jihadists.

I am encouraged by the bonds of friendship forged today at our meeting, and I look forward to continuing this very healthy dialogue. The relationship we established was so positive that the Imam has invited me back to speak to not only some of their youth, but also at one of their worship services.

If Cain’s views on Islam really have changed, that’s great. But from a leadership standpoint, the initial problem remains. Cain, despite running on a platform of constitutional conservatism, jumped to bigoted conclusions about American Muslims based on a handful of readily debunked conspiracy theories. When he condemned the construction of a mosque in Murfreesboro, Tennessee, he cited the attorney who filed suit to block it—an attorney who has also alleged that President Obama is attempting to raise the black flag of Sharia over the White House. When Cain tried to find examples of Islamic Sharia law being forced on American courts, he errantly cited a case in Texas (the case was actually in Florida), and seemed willfully ignorant of the fact that the case followed the same arbitration process that applies to all religious groups.