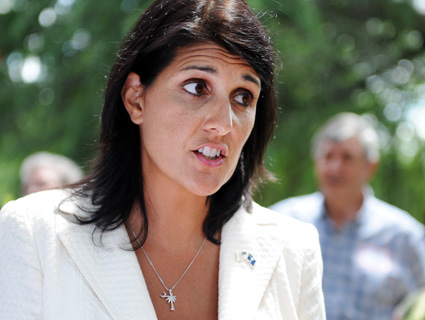 Not so inspiring? Lying about where you’re from, like South Carolina Republican Gov. Nikki Haley (R-SC), the American-born child of Indian parents, might have done. The Associated Press reports that in 2001, Haley listed her race as “white” on her voter registration form.

State Democrats accuse her of being a fake-race opportunist in a state that is, according to the US Census poll, about 66% white (and just a tick over 1% Asian). From the South Carolina Post and Courier:

The state Democratic Party, which first obtained [Haley’s voter registraton information], is calling Haley out on the matter and challenging whether her inconsistency on the card might have made her ineligible to voter under the state’s new Voter ID law.

Dick Harpootlian, the party chairman, said whether Haley listed her race as white or not doesn’t really matter to him, but the issue is that the governor has shown a pattern of such actions.

“Haley has been appearing on television interviews where she calls herself a minority—when it suits her,” Harpootlian said. “When she registers to vote she says she is white. She has developed a pattern of saying whatever is beneficial to her at the moment.”

For Haley, voter fraud is a big deal. She recently signed a new law requiring that voters present photo identification at the polls that, she says, will “improve South Carolina in terms of integrity, accountability and transparency.” Voter ID laws, of course, don’t actually decrease voter fraud (which is virtually nonexistent). Instead, they mostly keep Democratic voters away from the polls.

Haley hasn’t yet responded to the South Carolina Democrats’ accusations. But even though she didn’t exactly commit voter fraud, her self-race-mis-classification seems to undermine her credibilty as someone who wants to prevent people from lying on their way to the voting booth.