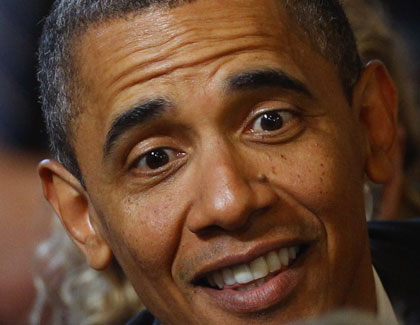 The report was cause for alarm—and within moments of its release partisans on all sides were yelling (via email press releases). The reaction boiled down to this: Republicans and conservatives are blaming Democrats for failing to slash the federal debt, lower taxes, and wipe out regulations, all of which, they claim, stifle job creation (even if taxes are at a historic low and President Obama and the Republicans negotiated a deal last December that extended the Bush tax cuts). Congressional Democrats are blaming GOP obstructionism. And progressives are excoriating the GOP’s obsession with deficit reduction and the Obama administration’s acceptance of this misplaced focus on the debt. In a statement, Obama acknowledged that “the debate here in Washington has been dominated by issues of debt limit,” not jobs creation. But he did not assume any blame for that and called for continuing negotiations on debt reduction and for jobs-related programs, including an infrastructure initiative, patent reform, and trade deals.

From that swirl of finger-pointing, here’s a sampling of reactions:

Heather Boushey, an economist at the left-leaning Center for American Progress, says cutting jobs spending, which the GOP wants, will only hurt the labor market more:

New data show that the labor market is floundering. Private-sector employers added only 57,000 new jobs in June while layoffs in government brought the total new jobs to a mere 18,000. This is grim news for workers and should be seen as a serious wake-up call to policymakers. We cannot get our fiscal house in order until we get America back to work. The economy will not be able to withstand the shock of running into the debt ceiling, but it will be a tragedy if the negotiations lead to reductions in public spending while the job market is so weak.

Heidi Shierholz, an economist at the left-leaning Economic Policy Institute, says “virtually every single measure [in the jobs report] was devastatingly weak”:

This is a remarkable, across-the-board backslide. The President and Congressional leaders need to stop talking about deficit reduction and start talking about job creation.

The stimulus spending binge, excessive government regulations, and our overwhelming debt continue to hold back job creators around our country. Tax hikes on families and job creators would only make things worse.

Senate Majority Leader Harry Reid (D-Nev.) used the jobs numbers to repeat his demand for a “balanced approach” to shrinking the federal deficit:

I hope the news that our economy is not creating jobs at an acceptable rate will cause Republicans to start taking job creation seriously. So far this year, Republicans have derailed every common-sense, bipartisan jobs bill we have brought to the floor. Democrats will continue to fight to put Americans back to work and we hope Republicans will join us.

…Most of all, we need to make sure we avoid the economic catastrophe that would result from letting the United States fail to pay its bills for the first time in our history. This would cause the markets to plummet and harm the economy as Americans see their savings and retirement funds depleted. That is something the middle class cannot afford.

[The American people] really know that the number one issue right now is turning the economy around and creating jobs, and clearly the president’s policies haven’t worked and are a failure. I wish it was otherwise, but it has not worked and the stimulus has only brought us deeper in debt with nothing to show for it.

Washington needs to quickly and aggressively shift from its long-term debt obsession to the much more immediate jobs problem.

To do otherwise at this point would be deeply irresponsible….

Look, I’m not trying to be unduly negative here. Obviously, a stall is better than the massive job losses that characterized the Great Recession. But if policy makers fail to recognize that our most pressing problem right now is job creation, they are a big part of the problem. We need them to be part of the solution.

House Majority Leader Eric Cantor (R-Va.) says Washington lawmakers must not raise taxes as part of a deficit reduction deal, even more so in light of the jobs report:

If you look at the jobs report, the results of current policies, and where we are in this economy, that is why the Biden talks had to end. Because the discussion in those talks turned to the other side insisting that we raise taxes. Now it just does not make sense for Americans to suffer under higher taxes in an economy like this. As the Speaker said, there is no way that the House of Representatives will support a tax increase.

Chad Stone, the chief economist for the Center on Budget Policy and Priorities, contends that Washington is on the wrong road:

Today’s very disappointing employment report shows that two years after the technical end of the recession and after 16 straight months of private-sector job creation, the jobs deficit remains huge (see chart). The depth of the job losses from the recession is unprecedented since the Great Depression, and the length of time it will take just to get out of the jobs hole—much less to restore full employment—will dwarf that of the sluggish jobs recovery from the 2001 recession.

It makes no sense that in an economic recovery still struggling to gain momentum, policymakers are easing up on the gas and threatening to slam on the brakes. But that is just what is happening.

“Today’s disappointing jobs report is proof that Congressional Republicans’ plan to hold our economic recovery hostage for their own political gain is working at the expense of millions of Americans who are still looking for work. The right wing is using the uncertainty caused by the potential of defaulting on our financial obligations as leverage to institute their cut and gut economic policies.

“We cannot accept any deal on the debt limit that harms seniors, low-income Americans or adds one more worker to the unemployment rolls. That means we cannot accept billions in cuts to Medicaid and Medicare.”

The lousy jobs numbers—no surprise—have reaffirmed the economic views on all sides. But perhaps they will add even more urgency to the ongoing debt/deficit negotiations. They do seem to have reminded the president that it could be politically perilous for him to be sucked into a deficit-over-all-else black hole.