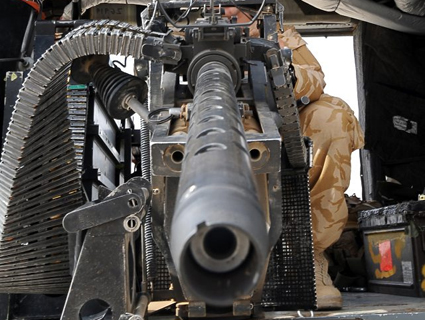 Lynne Ferrari Blankenbeker, a Republican lawmaker in the New Hampshire Legislature, has taken union-bashing to a whole new level.

In a July 21 email obtained by Mother Jones, the New Hampshire state representative wrote to fellow legislators about a recent training stint with the Army at Fort Dix, in New Jersey. A military veteran who has served in the Middle East, Blankenbeker described learning to drive an Army Humvee wearing night-vision goggles. She also trained as a gunner, and had to this to say:

Today I got to be the gunner which was fun. The .50 cal is quite a gun! I was never ascared of the unions but they better not F#%k with me again!!! Just saying.

Blankenbeker did not immediately respond to a request for comment.

Blankenbeker’s relationship with unions in New Hampshire is a contentious one. The two-term representative, who represents parts of the city of Concord and says she’s “generally against big government,” has voted in support of right-to-work legislation, a direct affront to organized labor in the Granite State. Blankenbeker’s legislative record reads like a union organizer’s worst nightmare: She’s backed lowering student drop-out age, opposed a minimum wage increase, and supported slashing taxes on business profits.

The president of the State Employees’ Association, an affiliate of the national Service Employees’ International Union, called for Blankenbeker’s resignation just three months into the legislature’s session for her anti-union votes. And SEA even set up a website, FireLynne.org, to push for Blankenbeker’s ouster. “Your votes hurt the people who make our economy run,” the site says. “We’re tired of politicians making scapegoats of middle-class workers, like those who teach our children, plow our streets, and protect us during fires and emergencies.”

Her union-threatening email isn’t the first time Blankenbeker has stirred controversy with her remarks. In May, after President Obama announced the death of Osama bin Laden, Blankenbeker said there was a “possibility” that the Al Qaeda leader remained alive, joining a small band of “deathers” in questioning the terrorist leader’s killing in Pakistan.

Nor is it the first time this year a political figure was caught threatening violence at unions and their supporters. During the mass protests in Madison, Wisconsin, in February, a deputy attorney general in Indiana named Jeff Cox wrote on Twitter that police should “use live ammunition” on protesters occupying the Wisconsin state capitol in protest of Republican Gov. Scott Walker’s anti-union bill. Mother Jones broke the story of Cox’s controversial tweet on a Wednesday morning; by Wednesday afternoon, Cox had been fired.