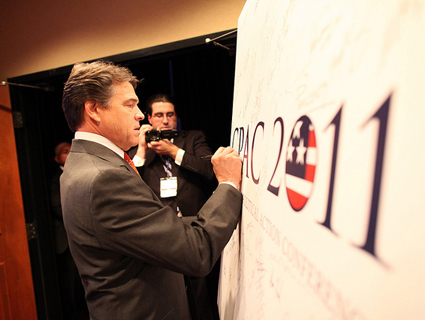 If Rick Perry runs for president—as looks increasingly likely—it’ll be on a platform of small-government fiscal conservatism. As Texas’ Governor-for-life (10 years and counting) he’s reined in out-of-control government spending and made the Lone Star State an economic oasis through his business-friendly tax code. That’s Perry’s argument, anyway, but there are just a few holes. For one, there’s the fact that as governor, Perry created a structural deficit—that is, Texas is guaranteed a $10 billion deficit at the start of every two-year legislative session because his administration miscalculated the amount of revenue Perry’s new franchise tax would bring in. He’s also been less than heroic in how he’s gone about closing those deficits. Last month, Perry and his allies closed the state’s $27 billion deficit through, as the AP put it, “accounting maneuvers, rewriting school funding laws, ignoring a growing population and delaying payments on bills coming due in 2013.” You know, tough choices.

But at least Perry has cut spending. Well, except, now the Star-Telegram reports that he exactly hasn’t done that either:

Perry has long promoted the state’s fiscal record as a model for the country and a key to why Texas has weathered the recession better than most other states. He has opposed new taxes and been vehemently anti-Washington, and his message is drawing interest among Republican primary voters nationwide.

Yet before the latest one, the Texas budget had consistently grown during Perry’s time as governor, with total spending rising faster than inflation and population growth, state data show.

What’s more, spending through 2011, adjusted for population and inflation, rose more on average while Perry has been in charge than it did under his predecessor, George W. Bush, according to a Star-Telegram analysis.

That’s not necessarily a bad thing. Given the kinds of services Perry has cut, you could make a pretty good case that he should have pushed for much larger budgets. And as the story notes, the budget increase mostly comes from federal funding—like the stimulus—rather than state-specific policies (which have decreased). But that’s a far more nuanced picture than the anti-Washington, anti-spending small-government ideology he trumpets.