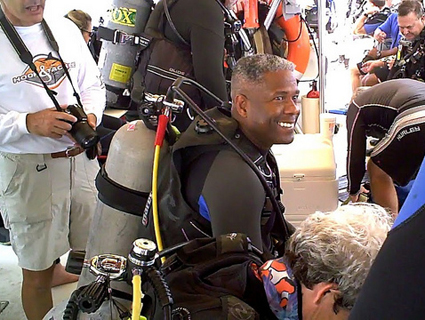 By now you’ve read about Florida GOP Rep. Allen West’s unhinged email rant, in which he told Rep. Debbie Wasserman-Schultz, who represents his neighboring congressional district, that “you have proven repeatedly that you are not a lady.” (He also called her “vile, unprofessional, and dispicable.”) West has since either apologized or not apologized, depending on whom you talk to, but one thing is indisputable: He and his opponents are going to milk this baby for all its worth.

On Wednesday, West fired off a fundraising email to supporters, painting himself as the target of the Democratic attack machine; Democratic groups like EMILY’s List did their best to capitalize on the moment as well.

West says stuff like this all the time though, which raises the question: Is his crazy talk a political asset, or a liability? As it happens, Case Western Reserve University political scientist Justin Buchler has released a study (PDF) that answers almost that exact question:

[T]his paper proposes a measure of infamy for Members of Congress based on the frequency with which their names are used as internet search terms paired with epithets attacking either their intelligence or their sanity. Using that measure, the paper examines the statistical predictors of internet infamy. Not surprisingly, the results suggest that ideological extremism increases the likelihood of a legislator attaining such infamy, as does a leadership position in Congress…

The results in this paper suggest that infamy is more electorally harmful than beneficial. While infamous legislators raise more money than their lower-profile colleagues, their infamy also provides a fundraising boon to their opponents, and in House elections, infamy appears to have a direct negative effect on vote shares, at least for Republicans. Most surprisingly, these results are robust even controlling for ideological extremism.

Looks like we may have been on to something.