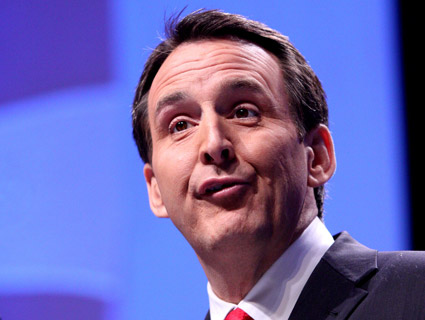 Tim Pawlenty, the former governor of Minnesota, is a top contender for the 2012 Republican presidential nomination.<a href="http://www.flickr.com/photos/gageskidmore/5449736740/">Gage Skidmore</a>/Flickr

Is GOP presidential candidate Tim Pawlenty the most pro-life candidate in the 2012 field? That’s what the editor of LifeNews.com, the pro-life movement’s flagship media publication, suggested in a March op-ed, and it wasn’t hard to see why: As Minnesota governor, Pawlenty embraced the shaky notion of “fetal pain” during abortions, threw up hurdles to women seeking abortions, and even declared April “Abortion Recovery Month.” But a closer look at Pawlenty’s time as Minnesota governor reveals that his record on reproductive rights isn’t as perfectly right-wing as his supporters claim.

First, some background: In 1978, the Minnesota legislature created the Family Planning Special Projects grant program, which doled out money several times a year to family-planning clinics throughout the state that served mostly rural and low-income people. Among those recipients were various Planned Parenthood branches, county health centers, and other local clinics. By the late 1990s, the grant program was the envy of public-health experts, having grown in size to $5 million a year. That money funded outreach, public health education, and both medical and non-medical family planning.

Then, in 2002, Tim Pawlenty moved into the Minnesota governor’s mansion, and by the start of his second term, the state’s family-planning money pot had dwindled to $3.8 million a year. The Minnesota legislature responded by voting to pump $1.15 million into the program. Despite his evangelical bona fides and staunch opposition to abortion, Pawlenty approved the cash infusion for Planned Parenthoods and family-planning clinics statewide. One local newspaper called the bill a “dizzying increase” in funding and a big step toward “greatly expanding contraceptive care to Minnesota women.”

Connie Lewis, vice president of external affairs for Planned Parenthood in Minnesota, North Dakota, and South Dakota, says her organization was “very pleased” with the increase in family planning funding approved by Pawlenty. Lewis adds that funding for the Family Planning Special Projects program in fact increased over the entirety of Pawlenty’s governorship, up to about $5 million a year by the time he left office.

Pawlenty’s decision broke with pro-life outfits such as the Minnesota Family Council, an ally of the governor’s. But while the decision may have irked social conservatives, it made perfect sense to the fiscal conservative crowd: Health experts have estimated that every dollar spent on family planning saves nearly four dollars down the road on pregnancy-related spending. (A spokesman for Pawlenty did not return a request for comment.)

Pawlenty’s million-dollar boost for women’s health clinics including Planned Parenthood isn’t the only blemish on his record as a diehard social conservative. Near the end of his second term as governor, Pawlenty backtracked on his previous positions by quietly rejecting federal money for abstinence-only sex education in Minnesota. Instead, the state only funded programs that took a more rounded and proven approach to teaching young people about sex, pregnancy, and sexually transmitted infections.

Turning down the abstinence-only money marked a shift for Pawlenty. For the first six years he was governor, Pawlenty kept conservative and religious groups happy by accepting funding for abstinence-only sex education; in 2004, the state took as much as $2 million for abstinence-only programs. But, according to Brigid Riley of Teenwise Minnesota, a non-profit that supports comprehensive sex education, it became increasingly clear during Pawlenty’s time in office that abstinence-only education was ineffective and a waste of money. In 2007, Pawlenty took the advice of the state Department of Health and quietly rejected $500,000 in abstinence-only funding for the 2008 and 2009 fiscal years. The way Riley sees it, Pawlenty finally faced up to the scientific reality. “The health department knew that this [abstinence-only] money was supporting programming that wasn’t making a difference,” she says.

Like Pawlenty’s Planned Parenthood support, his sex-education decision might have angered the Christian right, but it made sense financially. Accepting federal money for abstinence-only sex ed required the state to pony up hundred of thousands of dollars in matching funds; federal funding for comprehensive sex ed came with no strings attached. That match was key in his 2008 decision, Riley says.

Pawlenty’s rejection didn’t last long. In 2010, he doubled down on his original position and resumed taking federal money for largely debunked abstinence-only sex ed while declining money for comprehensive sex ed—a move that perplexed public health advocates and pleased Pawlenty’s social-conservative base. “It’s better to spend no money on sex education if it’s going to have a condom message,” Tom Prichard, head of the Minnesota Family Council, told the Star Tribune. “You are pouring fuel on the fire.”

Family planning groups condemned Pawlenty’s flip-flop-flip as nonsensical in the midst of an “epidemic” of sexually transmitted diseases among young Minnesotans. “It defies logic that the governor of a state in a budget crisis would turn away nearly a million dollars in federal funding for services that are profoundly needed across Minnesota,” Sarah Stoesz, president of Planned Parenthood for Minnesota, North Dakota, and South Dakota, said at the time.

Teenwise’s Riley saw Pawlenty’s second flip as a purely political decision. Pawlenty’s campaigning with John McCain during the 2008 presidential race had boosted his national profile, and rejecting federal funds from the Obama administration might have bolstered his GOP credibility. “He’s a master of this political stuff,” Riley says. “It’s scary.”

Of course, the bulk of Pawlenty’s record on reproductive rights speaks for itself. As governor he signed legislation requiring a 24-hour waiting period for women wanting to get an abortion. And after approving an increase in family planning funding, he later proposed slashing $2 million from the Family Planning Special Projects program. In other words, Pawlenty pivoted like an NBA point guard on key reproductive rights issues throughout his tenure as governor.

The question is which direction will Pawlenty take as a presidential candidate. Will he be the fiscal conservative who takes his cues from what science and the data say? Or will he tell social conservative and evangelical Christians what they want to hear?