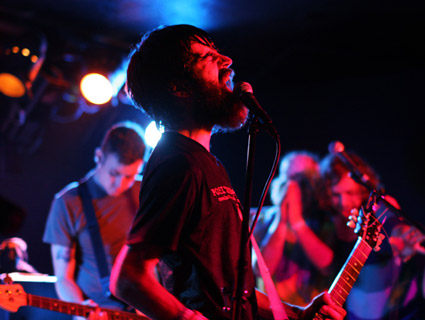 A couple of weeks back, Titus Andronicus opened for Okkervil River at Oakland’s Fox Theater, but based on the kids going wild up front, you would have thought Titus was the headliner.

After the musicians calmly took the stage, a bandana-clad audience member shouted, “Titus, fuck yeah!” Taking the cue, front man Patrick Stickles turned to his bandmates: “All right, let’s do this.” And the show exploded into the angry, anthemic, and melodic punk energy of “A More Perfect Union,” the opening track of the band’s Civil War-themed album, The Monitor.

When Titus played “No Future Part Three: Escape From No Future” for the third song, Stickles wailed over and over like a record stuck on repeat, “You will always be a loser.” Coming from another band, that line might sound like an insult. But when Stickles sings it, you can empathize with him—he’s saying “you,” but he could just as easily be staring into a mirror and singing it to himself.

The recently restored Fox is one of those gorgeous, over-the-top movie palaces built in the late 1920s. Standing underneath its opulently carved wooden ceiling and facing its gilded stage guarded on either side by towering Hindu deities with glowing green eyes, it feels a little too clean and luxurious for a punk show. The atmosphere did, however, lend a hallowed air to the performance. And when Stickles sang—or howled, or ranted—about living in fear, the demise of our species, and urinating from the top of a metaphorical mountain, every word and chord felt beautiful and real. As the band drove its van on to San Diego, another stop on its national tour, Stickles told me about how the band got its name and where some of his prodigious angst emanates from.

Patrick Stickles: I used to be a buff back in high school, but not as much of one anymore. It doesn’t really have anything to do with anything… It’s just a name. Like the guy said, ‘What’s in a name?’ We had to be called something. With the horror porno element, you’re right that Titus Andronicus occupies an interesting nexus, considering it’s schlocky and extreme entertainment, but it’s also part of the canon. It’s like the interception between the carnal and the cerebral urges, and that’s where all the good rock and roll happens, in my estimation. But again, that wasn’t why it was chosen. That was decided after the fact so I would have something to say when people asked me about the name.

MJ: There’s a lot of darkness in your lyrics. Who writes them, and how?

PS: I handle that duty. The process is to just go around and wait for the synapses to fire in the right direction.

MJ: What kinds of things inspire you to write? Are your lyrics personal, or do you write from a more general perspective?

PS: No, I just write exclusively about myself. That’s really the only thing on this Earth that I’m an expert on—my experiences. Trying to talk about anything else would just be talking out of my ass.

MJ: Some of your songs, like “Joset of Nazareth” or “A More Perfect Union” have religious references. Where do these references come from?

PS: I was raised that way; my family is pretty serious Catholics. It’s not something I really fuck with anymore, but it was a huge part of my upbringing. It informed a lot of my vocabulary and framed a lot of stuff with those sorts of images. I guess it’s just the guilt, the dread that at any moment, I could be struck by lightning. Or that even though I feel like I’m doing my best to be a good guy, I still might actually be an asshole, and I’m going to burn for all eternity for failure to love properly. It’s just that dread of some kind of executioner looming over me… I guess that would be the big contribution of Catholicism to our lyrical canon.

“Even though I’m not scared that God is going to actually appear and send me to Hell, that’s just part of how my brain’s wired now.”

MJ: So is this a real fear?

PS: No, that’s silliness. But I shouldn’t say that it’s silly. It means a lot for a lot of people I respect, even if it’s not for me. But it’s in my brain—that feeling of dread. Even though I’m not scared that God is going to actually appear and send me to Hell, that’s just part of how my brain’s wired now. I can’t help but feel a sickening dread of the possible consequences of even my most innocuous actions. It’s like a Pavlovian response to having any kind of fun.

MJ: Would you ever sell your songs to be used in commercials?

PS: Definitely not. This sneaker company was trying to trick us into getting their hands on our music. We told them to go to hell! But sometimes we play at festivals, and this same sneaker company is there, and we accept the sneakers they give out. Do you think that’s a conflict? [Laughs.]

MJ: Why are you against selling your songs for commercials?

PS: Because the song is an end to itself. The song isn’t there to get you to do some other crap that you don’t even want to. And besides, one shoe is as much the same as another, right?

PS: Yeah, but those people have been hoodwinked and bamboozled by the advertisers into thinking that one kind of shoe will make you cool. My dad recently was scolding me because he heard that we refused a good bit of money from a soda company. He was like, “Isn’t that kind of a hip, happenin’ soda?” Get real Dad! There’s no such thing as a hip soda.

MJ: Speaking of hip, I heard this tall, lanky teenager in the crowd at the Fox tell his friends that you’re “inspirational” to him because you’re also a tall, lanky dude, and he sees photos of you in Rolling Stone. What do you think about that?

PS: Dude, that’s cool. I got love for all my tall lanky boys. We want them to see us and recognize that we’re just like them. I can remember what a powerful thing that was to realize, when I was their age. Just breaking down that fourth wall and showing that creative people are just regular people.

PS: Fuck, how long do I have? I don’t know. We’re a punk rock band. We’re just trying to keep it real and show them we’re regular folks just like they are, and our feelings and experiences are valid. Together we can celebrate life and all of its joy and sorrows.