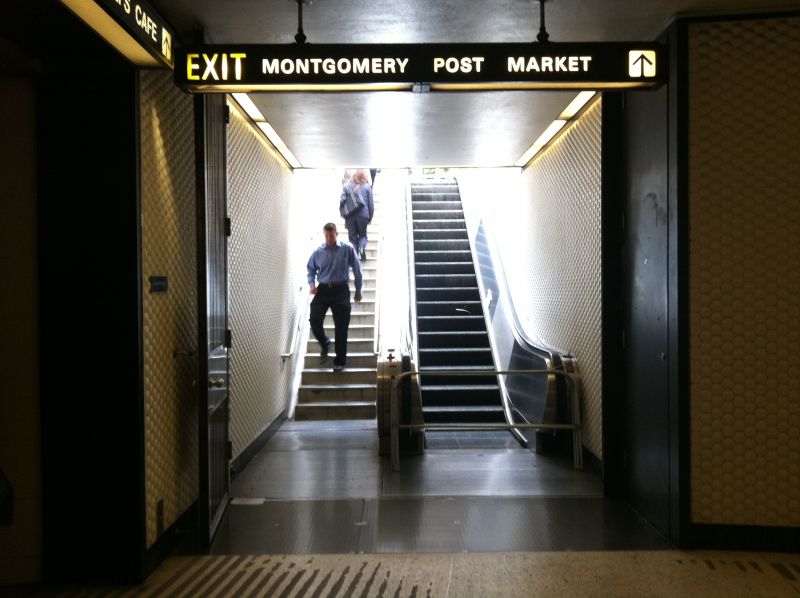 As my colleague Hamed Aleaziz has written, there were demonstrations last night in San Francisco over Bay Area Rapid Transit’s (BART) decision to suspend cell service to prevent planned protests over police brutality. Transit authorities decided to simultaneously close down all of downtown San Francisco’s subway stations, but re-opening them proved chaotic and in some cases, injurious.

I experienced this lack of foresight personally, as my seven-months pregnant self was briefly crushed by commuters while a panicked crowd knocked people to the ground at Montgomery Station in downtown San Francisco. I only write about this because I haven’t seen it reported elsewhere.

The situation I’m referencing happened at the Sutter/Post entrance to Montgomery Station around 6:30 p.m. The station entrance (seen above) has one flight of stairs running parallel to an escalator. Yesterday, SFPD told me that they were opening this entrance first so as to avoid a rush of delayed commuters. Well, that didn’t work out so well. The stairs and (then stationary) escalator were fully packed by the time they opened the gate in front of the stairwell. For reasons unknown, they did not open the gate in front of the escalator. This was okay at first, but when I was about half way down the escalator, it started moving. In a few seconds, there were shrieks and yells and people struggling. The escalator was moving so fast, people getting off it were being pushed into the metal grate by the commuters coming behind them. In a few fast moments, there was a crowd three- to four-people thick being shoved—hard—against the still-closed gate. And the escalator was moving more commuters into them every second.

I tried to turn around and walk back up the escalator but it was full. I was wearing sandals and could just see the escalator’s metal teeth tearing up my toes into a bloody pulp, but luckily I was able to “tread water” long enough to make it past. But then I was stuck. My arms were pinned to my side and I could feel my big belly being pressed harder and harder into the petite woman in front of me. Stupidly, I wondered if I would get pick-pocketed. The only part of my body I could move were my feet, and then only on tip-toes.

This is when people started panicking. A scared-looking transit officer started yelling “Run! Move! Move!” and bodily pulling people through the station entrance. In the commotion, several commuters were knocked to the ground, stepped on, and stumbled over. Most were able to get up quickly, but one poor woman was left lying on the ground, injured and in pain, for a few long moments before the officer was able to help her up.

The situation was resolved fairly quickly, mostly by people on the escalator realizing the situation and jogging up it, which prevented others from getting on it in the first place. This gave the crowd at the bottom of the escalator a few feet in which to maneuver, and it moved me through the entrance. But it was piss-poor planning to start an escalator 1) with people on it 2) when it’s crowded and 3) when there’s a closed metal gate in front of it. In addition, there didn’t seem to be anyone nearby who could stop the escalator once it started. Today, when I went back by the station entrance, the escalator was marked as “out of order.”

The more I thought about it later, the more it pissed me off. Due to the pregnancy, my center of gravity is off and my joints are as loose as Gumby’s. It would have been really easy for me to get knocked down or to fall in the chaos. Or if the pushing hadn’t slowed, people could have been seriously crushed. While I’m pretty durable, I can’t say the same about my fetus. Personally, I just really don’t see the logic in BART and MUNI inconveniencing (and potentially endangering) nearly 350,000 commuters on account of 50 to 150 protesters. And if the powers that be are going to close down all the trains in San Francisco, at the very least, they should have a sound plan for re-opening them.

For more coverage of the protests, check out the Bay Citizen, MissionLoc@l, and SFist.