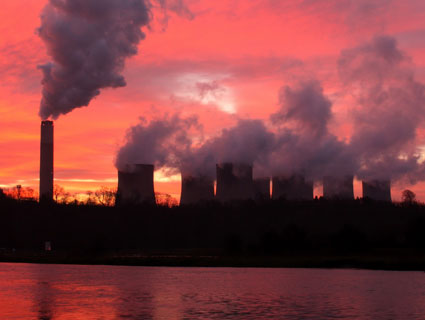 Since the Bush years, government agencies like the Environmental Protection Agency, Council on Economic Advisers, and Department of Transportation have been calculating the economic costs of the damage caused by carbon dioxide emissions and the resulting climate change. Depending on who’s running the calculation and their methodology (economic modeling based on projected growth, climate behavior, and related physical damages), these estimates currently range from $5.50 and $72 per ton of CO2. A new report, however, says that these estimates are way too low.

In 2010, one ton of CO2 in the atmosphere cost up to $893 in economic damage—more than 12 times the government’s highest estimate.

After running an independent analysis, Economics for Equity and Environment (E3), the network of economists that published the report (PDF), found that in 2010, one ton of CO2 in the atmosphere did up to $893 in economic damage—more than 12 times the government’s highest estimate. By 2050, the group says, these costs could rise up to $1,550 per ton of CO2 emitted. (A ton of CO2 is approximately what you release into the atmosphere by driving a car for two-and-a-half months.) While the government agencies acknowledge that their estimates are “imperfect and incomplete,” E3 says they also omit “many of the biggest risks associated with climate change” and downplay “the impact of our current emissions on future generations.”

By weighing the cost of damages incurred by climate change, or what economists call the “social cost of carbon” (PDF), you can assess how much money you’d save by avoiding that damage. One way to look at it would be like preventative health care for the environment. Economists might examine the physical costs of a disaster like the Mississippi River floods (which reportedly have incurred damages between $1 and $2 billion) and ring up the amount of money that could be saved by avoiding similar disasters in the future. Putting this price sticker on CO2 emissions is particularly useful when mulling over regulations that could effect emissions, like quality standards for home appliances, auto fuel economy, or broader energy legislation.

But why the huge discrepancy in estimates? Figuring out the “social cost of carbon” is something of a guessing game, because it’s almost impossible to precisely predict temperature increases, which might vary and lead to different outcomes depending on the region you live in. “Scientists cannot definitely state that certain pollution levels will lead to particular impacts, which means that the consequences for humans could be much less or much more severe than the median estimate,” according to a recent report on the topic by the World Resources Institute. To complicate matters further, the E3 report points out that there’s “no consensus in the longstanding controversy on the appropriate way in which to value the future costs and benefits of climate change.”

But as E3 points out, the precise cost is not so much the issue. The bigger problem is that the current government estimates for the cost of CO2 emissions are smaller than the dollars required to avert those damages by reducing emissions. The US Energy Information Administration estimates these abatement costs between $175 and $500 per ton of CO2 in 2050. From the government’s standpoint, ambitious measures to reduce emissions appear uneconomical compared with the maximum $72 of damage it would incur by allowing emissions to rise.

According to E3’s analysis, however, it would cost far less to lower emissions now and avert the risk of future damage. So long as this is the case, the report says, “then it is worth doing everything we can to reduce emissions.”