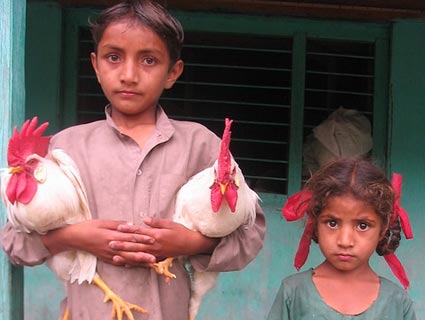 Last week, researchers from New Zealand published a paper that showed that kids raised on livestock farms had an elevated risk of developing blood cancers like leukemia and lymphoma later in life.  It didn’t take long for the news of this finding to make it around the world. On Friday, an MSN Health News headline proclaimed, “Growing Up Near Livestock Tied to Blood Cancers.” Whoa now, I thought. Near livestock? Plenty of people grow up in the general vicinity of farms. And given the growing popularity of urban agriculture, even city kids could be exposed to livestock on their very own block!

But before you forbid your kids to visit the petting zoo, let’s take a closer look at the study. The researchers analyzed death certificates for more than 100,000 New Zealanders between the ages of 35 and 85, from 1998 and 2003, cross referencing cause of death with parents’ occupation. If the deceased person had a parent who was, say, a poultry farmer, the researchers took that to mean that the person grew up on a poultry farm. The team found that subjects whose parents were livestock farmers were 22 percent more likely than those whose parents weren’t farmers to develop blood cancer as adults. The finding was especially pronounced among children of poultry farmers, whose blood cancer rate was three times that of their non-farm-kid peers.

So, how to explain the connection? The researchers hypothesize that exposure to animal viruses during childhood might be to blame, making people more vulnerable to blood cancers later in life. But I wondered whether the researchers had considered the effects of pesticides, antibiotics, and other chemicals. Andrea Mannetje, a lead researcher on the study, explained that her team had looked at animal farming separately from crop farming, since crop farms generally use more pesticides. They found an increased cancer risk for growing up on animal farms but not for growing up on crop farms. “This suggests that pesticide exposure cannot explain this observed pattern for growing up on a farm,” Mannetje says.

Mannetje admits, though, that livestock operations aren’t always chemical-free. And unfortunately, the death certificates provided no information about which kind of chemicals and medicines each farm used, or in what quantity. In fact, the researchers didn’t have a clue about the size or kind of operation to which each subject was exposed. Giant factory farm? Tiny mom-and-pop operation? No one knows. Given that, the headline claim that growing up “near” livestock leads to cancer looks awfully vague.

Still, despite the limitations, there’s lots to pay attention to in this study. For example: Growing evidence suggests that kids raised on farms are less prone than non-farm kids to asthma, allergies, and other conditions involving the immune system. Some studies have found that people who suffer from these conditions are actually less likely to develop cancer than nonallergic people. One explanation for this, as the paper notes, is that “allergic conditions may enhance the ability of the immune system to detect and eliminate malignant cells.” It’d be interesting to look at childhood farm exposure and cancer rates in the developing world, where asthma and allergies are much rarer than in the US.

The relationship between farming and cancer is strange. Several studies have found that farmers have an increased risk of developing leukemia and lymphoma. On the other hand, at least in the US, farmers are less likely than others to die of heart disease and cancers of the esophagus, bladder, lung, and colon, according to the National Cancer Institute. Having identified this pattern, researchers now hope to figure out what’s causing it. To that end, the institute’s Agricultural Health Study aims to tease out the particular environmental factors in farming that cause illness. The study is still going on, but one significant (if not terribly surprising) takeaway so far is that exposure to certain pesticides is linked to a wide variety of conditions, from cancer to Parkinson’s to retinal degeneration. For more on the specific findings, click here.