It’s not often that cable news covers complex environmental or labor issues, so I was hopeful when I heard that CNN’s Soledad O’Brien was doing a piece on the battle over Blair Mountain for the CNN In America series. I wrote about this site of a historic labor battle that coal companies are seeking to blow up in a piece last November, and the fight still rages on. Unfortunately, though, the CNN piece starts from the same tired tropes to talk about the issue and misses the bigger questions about mountain top removal coal mining.

The headline on the web piece is your first sign that the piece needs some help: “Steady job or healthy environment: What would you choose?” The story, posted in short clips online, has a number of flaws. Here are the top three:

1. The “jobs versus the environment” frame. The problems with this are numerous. First of all, mountaintop removal creates/sustains a whole lot fewer jobs than underground coal mining. Once you remove the coal, there are no more jobs there. The headline reference to a “steady job” must be some kind of dark humor, given the decline in coal jobs in this country.

Then, once you have created a monoeconomy based on coal, the disappearance of those jobs devastates the surrounding community—especially now that you’ve destroyed the mountains and polluted the surrounding areas, ruining property values and any potential for tourism. And then there’s the health factor…but I’ll get to that in my next point. In the meantime, here’s what poverty rates look like in central Appalachia near surface mining sites, via Appalachian Voices: 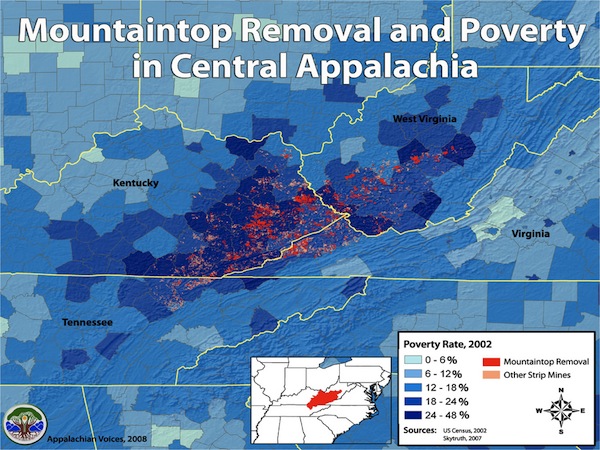 2. Human health impacts are ignored. The “enviros vs. jobs” frame ignores that this isn’t just an environmental question, it’s a health issue. Areas near MTR sites have been found to have higher rates of cancer, more birth defects, and additional lung and kidney problems. Unfortunately, this gets short shrift in the film.

3. It’s not just about “how a mountain looks.” That’s actually a direct quote from one of O’Brien’s questions in the segment. Yikes. Yes, topless mountains do look bad, aesthetically. But the real problem issue is that you destroy the ecosystem on those mountains, and then ruin the nearby waterways when you dump in the toxic debris. And while mining advocates in the segment claim that reclaimed MTR sites look just like they did before the mining, that’s far from the truth at many sites.

One last point is that it takes a while in the piece to get to the history of Blair Mountain, which is regrettable. It was the site of the largest labor uprising in US history, one that pitted coal miners against tyrannical coal barons and the state and national government. While the miners didn’t win this battle, it was seen as a significant step in the long-term struggle to gain rights for workers in this country. I don’t think it’s some grand coincidence that coal companies now want to blow it off the map. That’s clear from the shenanigans undertaken at the behest of coal companies to get the site removed from the National Register of Historic Places. So there’s a layer of significance to this site beyond the broader conversation about MTR in this country.

Jeff Biggers has compiled some responses from area residents on Alternet that are worth a read. Even though the segment falls short of what I hoped for, I guess I am glad to see MTR getting any coverage on cable television. I just wish they’d done a better job of it.