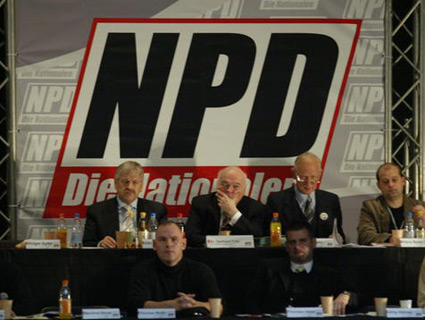 This one goes out to all those who say combating right-wing hate can’t be done with a dose of prankster humor:

At this summer’s “Rock for Germany” music festival in Gera, Germany on Aug. 6 (an event sponsored by the country’s neo-Nazi National Democratic Party), nearly 300 attendees were handed free souvenir t-shirts emblazoned with the nationalistic message, “Hardcore Rebels—National and Free” and a skull-and-crossbones-and-flag logo.

But what the fans didn’t know was that after running their new concert souvenirs through the wash, the original message fades dramatically, and a hidden one is designed to appear. The Guardian reports:

…The tagline turned into a message from a group offering to help far-right extremists break away from the neo-Nazi scene.

“If your T-shirt can do it, you can do it too – we’ll help you get away from right-wing extremism,” reads the slogan on the shirts after their first washing.

The shirts were handed [out]…by organisers after they had been donated anonymously. They were provided by Exit [Deutschland], a group which helps people disassociate themselves from the far-right.

The “Trojan t-shirts” also revealed the contact information for Exit Deutschland, an outreach group that tries to help teens “break with…right-wing extremism and build a new life” by stressing the “values of personal freedom and dignity.”

Though no one is expecting any of this to suddenly erase the xenophobic tendencies or extreme-right views of some of the festival-goers, Exit’s leaders still think the operation went off better than expected, according to Spiegel Online:

“Our name will be stored in their minds. And when they consider leaving the scene at some point, they will remember us,” [said Exit co-founder Bernd Wagner]. The group’s main goal was to reach young right-wing extremists “in a situation where they would hopefully be alone at home.”

A marketing expert in Hamburg, who wished to remain anonymous, came up with the idea together with his colleagues, [according to the German daily Süddeutsche Zeitung]. His firm paid for the T-shirts to be printed.

Compared to other creative political stunts, this one stands as one of the most honorable and well-intentioned in recent memory. Click here for a before-and-after image of the crypto-anti-fascist t-shirt.