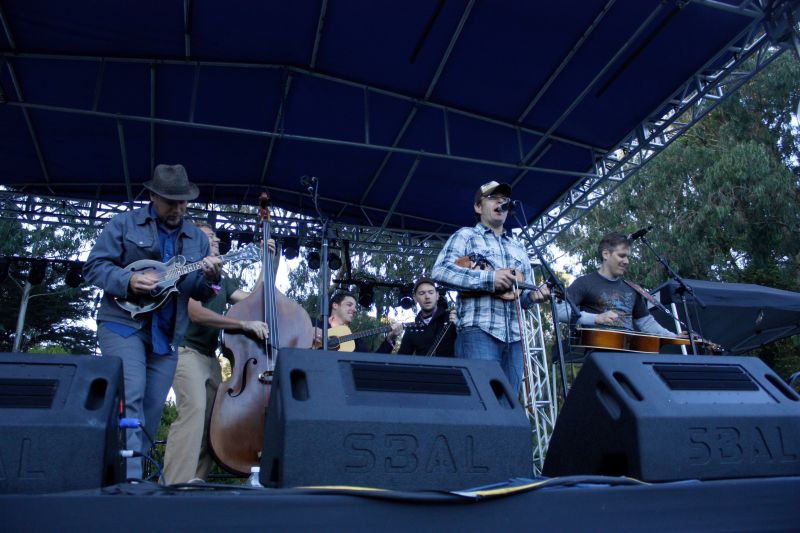 The Infamous Stringdusters at Outside Lands.Photo: Tim McDonnell

Chris Pandolfi doesn’t need to focus too much attention on tuning his banjo. We’re talking backstage at the Outside Lands music festival in San Francisco, and as he cleans strings and plucks chords, he never stops the flow of conversation, never gives a glance to the beautiful, well-loved instrument in his lap. The bluegrass licks that subtly interrupt us seem to issue from somewhere else, because to look at Pandolfi’s face you could never tell he was playing them. Perhaps that’s because Pandolfi is a thirteen-year veteran of his instrument, but it’s also probably because tuning up for big festival shows has become increasingly de rigeur for him in recent years.

Pandolfi makes up one-sixth of the rollicking bluegrass ensemble The Infamous Stringdusters, a group that has been on a steady uphill climb since being named 2007’s Emerging Artist of the Year by the International Bluegrass Music Association (their first album, Fork in the Road, also snagged top honors that year for best song and album). This summer, the band has done its time on the festival circuit, playing in Telluride, Grand Targhee, and most recently, performing with established rock stars of the Yonder Mountain String Band at Red Rocks. You might think a rise to the top would distract the band from its musical foundations, but as far as Pandolfi is concerned, nothing could be less true.

“You get experience on the job you can’t get any other way,” he said. “And it’s real, it’s easy, it’s all going in the direction of saying, ‘This is who we really are.’ We want to arrive on that big stage doing what we do most naturally.”

Fortunately for us in the audience, what the Infamous Stringdusters do most naturally is put on a virtuosic performance grounded in what Pandolfi calls “the Nashville pedigree,” but loaded with a healthy dose of rock and jazz fusion. Most of the songs had lyrics, but they served mainly as punctuation marks between fearless solos by former Dolly Parton sideman Andy Hall on the dobro, Andy Falco on acoustic guitar, and the rest of the finger-pickin’, fiddle-sawin’ crew.

What could have been a small show became a foot-stomping hootenanny, complete with an enormous, prodigiously hairy man wearing nothing but a pair of dirty overalls who looked like he’d walked to Golden Gate Park straight from the Appalachians.

The result is a progressive take on bluegrass that sets the Stringdusters apart from their contemporaries, and the audience at Outside Lands was all ears. Even at the end of the festival’s third day, folks found the energy to turn what could have been a small show into a foot-stomping hootenanny, complete with an enormous, prodigiously hairy man wearing nothing but a pair of dirty overalls who looked like he’d walked to Golden Gate Park straight from the Appalachians. “We have a link to the original bluegrass,” Pandolfi said. “Now our job as artists is to evolve that in whatever way. Some people want to just be a throwback, the art of imitation, the art of preservation, but honestly the music that inspired us originally just has nothing to do with that.”

Pandolfi first picked up banjo at the age of 18 after listening to Bela Fleck and the Flecktones, and came to bluegrass music through his study of the instrument. Though the only bluegrass album he listens to regularly is Jerry Garcia and mandolinist David Grisman’s classic collaboration Shady Grove, he’s drawn to the genre’s organic, raw sound that “other types of music just don’t have.”

“It’s a natural thing, it’s metal and wood, and there’s something cool about that,” he said.

At an International Bluegrass Music Association meetup five years ago, Pandolfi found a group of fellow musicians who felt the same way, and the Stringdusters were born. Since then, he said, the band’s primary goal has been to share their music with as many people as possible, and to keep pushing the size of the stages they play. And while that’s sometimes been an exercise in patience, there’s no sign the band plans to take the tempo down anytime soon: “When you’re a band you can see the next year and then you can sorta dream over the next five years, but anything beyond that is really hard to predict, because in this business what we’re all shooting for is that quick ride, you know, some real notoriety.”