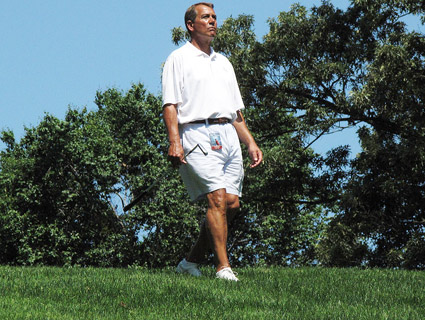 In 2005, Golf Digest magazine featured John Boehner—then a rising star among House Republicans, today the speaker of the House—as one of Congress’ sharpest shooters on the links. Despite committee leadership positions, Boehner still found time to log 100 or more rounds a year, often mixing politics and the putting green. “If someone I’ve gotten to know on the golf course comes into my office with a good argument,” he said, “I tend to want to listen.”

A lobbyist looking to twist Boehner’s arm could do worse than the Burning Tree Club outside Washington, DC, a male-only, hyper-exclusive country club that has counted presidents, Supreme Court justices, and powerful lawmakers—including Speaker Boehner—among its members. When it can, Burning Tree closely guards its member list, giving few clues about the men playing with the movers and shakers of Washington. But according to member information obtained by Political Correction, an affiliate of the liberal media watchdog group Media Matters for America, Burning Tree’s regulars include lobbyists for some of the most powerful corporations in America—and that membership gives them access to the most powerful man in Congress.

In the past decade, more than 70 lobbyists have belonged to Burning Tree, which caps total members at around 600 and charges a $75,000 initiation fee and $6,000 a year in dues. (In your dreams, regular duffers.) According to Political Correction, those lobbyists have represented Goldman Sachs, Koch Industries, the US Chamber of Commerce, RJ Reynolds Tobacco Company, health insurance giant Aetna, Northrop Grumman, Chevron Texaco, and Bank of America, among others.

Here’s a snapshot of the Burning Tree’s lobbyist members and the companies they’ve represented:

Another industry tight with Boehner and well represented at Burning Tree is Big Tobacco. The top individual donor throughout Boehner’s career is Bruce Gates, a lobbyist for cigarette company Altria. Some of Boehner’s closest allies in the business world reportedly include tobacco industry lobbyists. And Boehner is infamous for once handing out a half-dozen checks from the tobacco industry on the House floor as Congress debated legislation to slash tobacco subsidies.

Golf and politics often blend with Boehner. In February 2009, Boehner’s political action committee, the Freedom Project, spent upwards of $30,000 on a golf fundraiser at the Naples, Florida, Ritz Carlton. It was money well spent: Boehner’s PAC raked in $225,500 for GOPers in Congress. And Boehner has also hosted his own golf tour, raising political funds in multiple states. In its June issue, Golf Digest ranked Boehner the ninth-best golfer in Congress.

Kenneth Gross, a lobbying and campaign finance expert at Skadden, Arps, says the same lobbying disclosure rules apply at an elite country club like Burning Tree as they would anywhere else—in a restaurant, in the lawmaker’s office, you name it. But the benefit of playing golf at the same club is obvious. “You certainly get some more face time,” he says, “and a friendlier environment.”